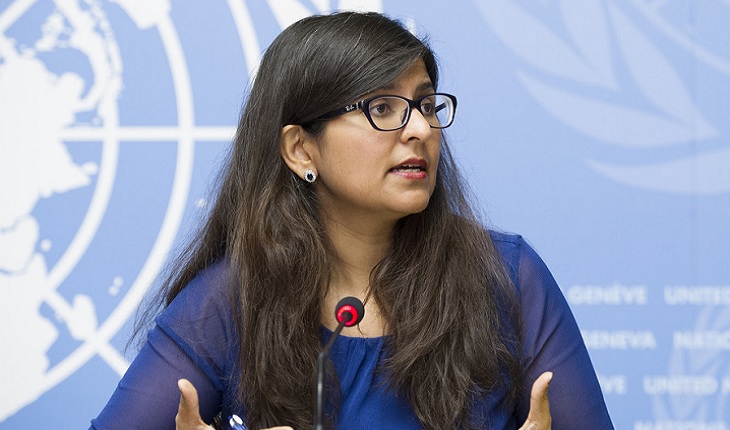 The United Nations has said the Myanmar military is again carrying out attacks against its own civilians which may constitute war crimes and said they are “deeply disturbed” by the intensification of conflicts in Rakhine State in recent weeks.

“The consequences of impunity will continue to be deadly,” said Spokesperson for the UN High Commissioner for Human Rights Ravina Shamdasani on Friday in Geneva mentioning that the attacks are taking place when the international community is taking steps towards accountability for the crimes committed against civilians in previous years.

In her briefing notes, Ravina said they condemn what appear to be indiscriminate attacks and attacks directed at civilians by the Myanmar military and armed fighters in the context of the ongoing fighting with the ethnic Rakhine Arakan Army (AA).

She said the conflict between the Myanmar military, known as the Tatmadaw, and the Arakan Army has given a rise to credible reports of the killing of civilians, burning of houses, arbitrary arrests, abductions, indiscriminate fire in civilian areas, and damage to cultural property.

The fighting has impacted the civilians of various ethnicities in Rakhine and Chin States, including Rakhine, Rohingya, Chin, Mro and Daignet, according to the briefing notes received from Geneva.

The reports received by the UN Human Rights Office, fighting has intensified in Buthidaung, Rathedaung, Kyauktaw, Mrauk-U, and Sittwe townships in Rakhine State in recent weeks, leading to the displacement of over 20,000 civilians.

The impact of the violence on civilians in northern Rakhine has been exacerbated by the government’s near-suspension of humanitarian access since January 2019.

In the most recent escalation, two military helicopters on the evening of April 3 flew over Hpon Nyo Leik village tract in south Buthidaung township and fired on civilians tending cows and paddy fields, killing at least seven civilians and injuring 18 others, according to sources on the ground.

The April 3 attack was carried out in an area that had seen large-scale displacement of Rohingya civilians in recent days, she said.

According to information received by the UN Human Rights Office, some 4,000 Rohingya were displaced between March 25 and 30 from the villages along the road connecting Buthidaung and Rathedaung towns.

The displaced had fled westward and are taking shelter in areas, including Hpon Nyo Leik village tract.

“We call on the Tatmadaw and the Arakan Army to immediately cease hostilities and to ensure that civilians are protected. Humanitarian access to all areas of northern Rakhine must urgently be restored, including those areas affected by recent clashes,” said Ravina.