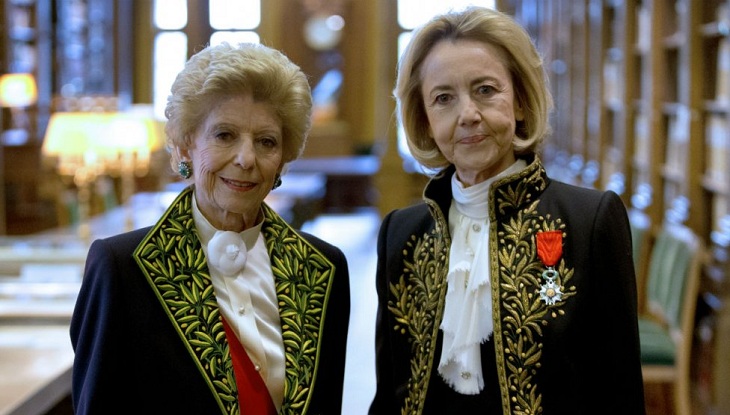 The official guardians of the French language ended centuries of male linguistic dominance Thursday by allowing feminine words for all professions.

The notoriously conservative Academie Francaise, which polices the language and has long resisted change, said there was now "no obstacle in principle" to the wholesale feminisation of job titles.

French women doctors could soon be referred to as "docteures" and teachers as "professeures" in its official dictionary, which currently lists "presidente" as the wife of a head of state rather than a female leader of a country.

Despite more than half a century of feminism, the language of French working life has remained resolutely male.

Most jobs titles are automatically masculine, apart from a few notable exceptions such as nurse and child-minder.

The male-dominated Academie had previously fiercely opposed change, branding attempts at "inclusive writing" in government documents as an "aberration" that put French "in mortal danger".

And it found a powerful ally in prime minister Edouard Philippe, a sometime novelist who has called for a clampdown on bids to make French more female-friendly.

He insisted last year that the "masculine (form) is a neutral form which should be used for terms liable to apply to women".

But in a historic about-turn Thursday the male-dominated Academie, whose mostly elderly members wear an ornate uniform and sword, approved a report advocating change compiled by three of its four active female members.

One, novelist Dominique Bona, had pointedly complained that it was no accident that the masculine was "chosen as the dominant gender" in French.

The "Immortals", as they are known, had been expected to cogitate for at least a week on the vexed issue but instead waved the report through by "a large majority" in a matter of hours.

"The Academie considers that all developments in the language aimed at recognising the place women have in society today can be envisaged," it declared.

It also opened the door to a more organic usage by saying that it "did not wish to dictate the rules by which titles should be feminised", saying it would be an "insurmountable task".

It said the debate about the use of the -eure ending in docteure, for example, "does not constitute a threat to the structure of the language as long as the final 'e' was not pronounced".

Writer and academy member Frederic Vitoux, who heads the Commission for the Enrichment of the French Language, said before the decision that he believed the reform would pass.

"For some professions it is simple," he said. "We have never had to asked ourselves should we be able to say 'actress'. But for others professions there are objective difficulties, because they cause confusion or don't work with the root of the word.

"How, for example, can we say a female doctor (medecin in French) without confusing it with 'medecine' (the science of medicine)?" Vitoux asked.

However, French speakers in neighbouring Belgium and Switzerland have long ago found ways around the problems.

The official language body in French-speaking Canada ruled on the issue in 1979, urging feminisation wherever possible. A female doctor there can be called "une medecin" or "une docteure".

Although French people have feminised professions informally for years, the end of the long official block comes as attempts to bring gender-neutral "inclusive writing" to state documents has sparked impassioned debate.

As it stands, a mixed-gender group of readers, for example, will always be masculine as long as there is one man in the room.

Campaigners for "inclusive writing" who believe the language is implicitly sexist -- say in these situations the French word for readers, "lecteurs", should be written as "lecteur.rice.s".

But inserting full stops into words has horrified the purists and been sent up by others as complicated and confusing.

In 2015, France's High Council for Equality Between Women and Men issued a guide urging public bodies to use feminine forms for jobs like "firefighter" and "author" where applicable.

Some critics such as philosopher Raphael Enthoven object to what they see as France's prescriptive approach to the language, which is spoken by some 275 million people worldwide.

They say usage should be allowed to evolve naturally over time.

As well as pronouncing on what is and is not permissible French, the Academie Francaise compiles the country's official dictionary.

However, its ability to perform the task has been called into question, with critics pointing out that its membership of 35 does not include a single linguist.