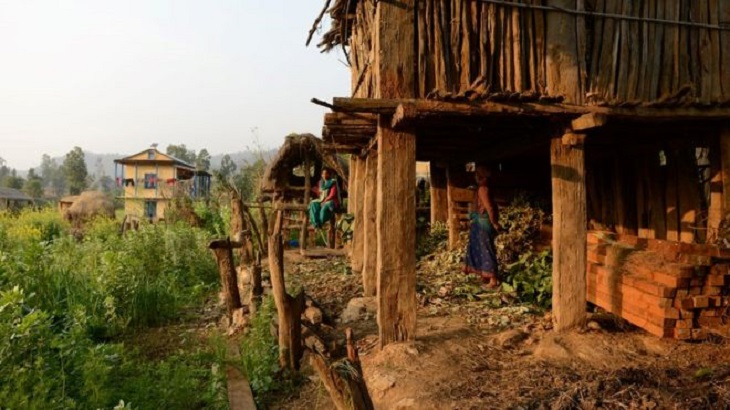 A 21-year-old Nepali woman died of suffocation in a windowless "menstruation hut" after she lit a fire to keep warm, say police.

Parwati Bogati was found when her mother-in-law went to check on her.

"She was excited about the next day as her menstruation would end. Poor child closed her eyes forever," Laxmi Bogati told the Kathmandu Post.

The incident in Nepal's Doti district comes just weeks after a mother and her two sons died in a similar shed.

Local police officer Lal Bahadur Dhami told, "We suspect she died due to smoke inhalation and suffocation because she closed the door of the windowless hut and lit a fire on the floor for warmth during the night."

Under the ancient practice known as Chhaupadi, women who have their periods or who have just given birth are seen as impure or as bringers of bad luck.

They can be forced to sleep outside in huts or cattle sheds, and are banned from touching some foods, religious icons, and men.

The huts can be bitterly cold, and those inside can also be exposed to criminal attacks. There have been several cases of suffocation, and at least one teenage girl has died after being bitten by a snake.

Nepal banned the traditional practice of exiling menstruating women and girls from the family home in 2005, and criminalised it in 2017 - but it remains widespread in rural areas.

In January, the deaths of a Nepali mother and her sons in the far-western Bajura district prompted locals to demolish the chhaupadi sheds in their village.

Under the law, anyone who makes a woman observe the custom faces a three-month jail sentence and a $30 (£23) fine.