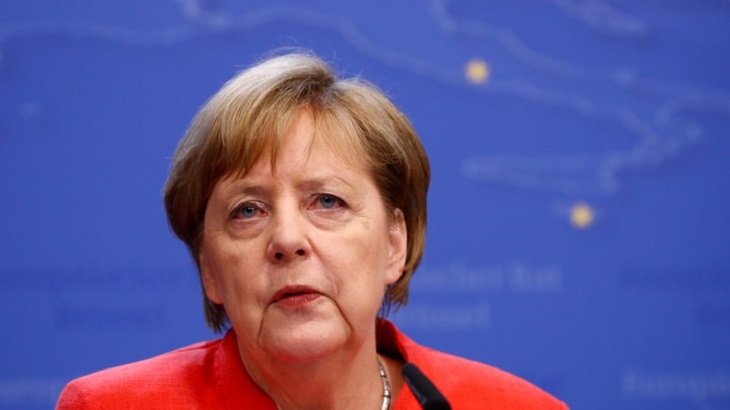 German Chancellor Angela Merkel underscored the urgency of combating anti-Semitism, racism and hatred more than 70 years after the Holocaust, calling for new ways to keep alive the memory of the millions of people killed by the Nazis.

German Chancellor Angela Merkel is pictured after speaking during a ceremony to mark the 80th anniversary of Kristallnacht, also known as Night of Broken Glass, at Rykestrasse Synagogue, in Berlin, Germany, November 9, 2018.

Merkel, in a video address, released ahead of Sunday’s International Holocaust Remembrance Day, said it was everyone’s responsibility to ensure “zero tolerance” of xenophobia and all forms of anti-Semitism.

“People growing up today must know what people were capable of in the past, and we must work proactively to ensure that it is never repeated,” Merkel said.

Millions of people were robbed of their rights, tortured and murdered — including an estimated six million Jews — across Europe from 1933 to 1945, when the Nazis ruled Germany.

The German leader called for new forms of remembrance due to the dwindling number of eyewitnesses from the Nazi era, and because of persistent hatred and incitement today.

Merkel expressed deep regret about anti-Semitism among Germans, as well as hatred of Jews among Muslim migrants and a hatred of Israel that she said could not be tolerated.

Germany last year appointed a commissioner to oversee efforts to combat ant-Semitism and will also set up a central repository to collect information about such incidents and attacks, with an eye to bolstering prevention, Merkel said.

“It will be crucial in the coming time to find new ways of remembrance,” she said. “We must look more closely at the personalities of people who were victims back then, and to tell their stories.”

Merkel cited the importance of supporting Holocaust memorials and private initiatives such as the “stumbling stones” project, which installs brass bricks inscribed with the names and key details of people near the homes from which they were deported during the Nazi era.

“I think these forms of remembrance ... are very important and will become more significant in the future,” Merkel said.

On Friday, the director of the memorial at the largest Nazi concentration camp on German soil barred the anti-immigrant Alternative for Germany (AfD) from a commemoration for the 56,000 people killed there during the Holocaust.

Volkhard Knigge, director of the Buchenwald Memorials Foundation, told AfD politicians in the state of Thuringia where the camp is located that he was responding to anti-democratic, racist and anti-Semitic tendencies in the party.

The AfD, whose popularity surged amid anger over Merkel’s 2015 decision to welcome over a million mostly Muslim migrants, says Islam is incompatible with the German constitution, but rejects charges of racism.