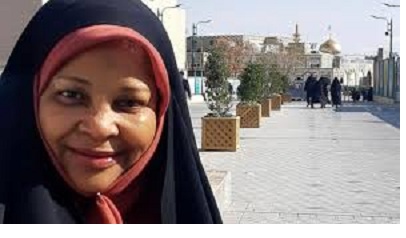 A prominent American-born Iranian journalist who was held in the US as a witness has been released from detention, an advocacy lawyer says.

Marzieh Hashemi was freed in Washington DC after being detained for 10 days, an attorney with the American-Arab Anti-Discrimination Committee told the BBC.

Ms Hashemi, who works for Iran's state broadcaster Press TV, was taken into custody in St Louis earlier this month.

Her detention came after Iran had arrested four Americans.

Tensions have been high between the US and Iran under President Donald Trump. In 2018 he pulled the US out of an international nuclear deal with Iran and re-imposed sanctions.

Why was she arrested?

Abed Ayoub, a lawyer with the American-Arab Anti-Discrimination Committee, told the BBC she was now with her family in Washington DC.

The 59-year-old producer and presenter was detained on 13 January after arriving in St Louis, where she was working on a documentary about Black Lives Matter, her son told the Associated Press news agency.

A court order unsealed on Friday confirmed that Ms Hashemi, referred to by her birth name of Melanie Franklin, was being held as a material witness in a criminal case, pending her testimony, and was not charged with a crime.

Authorities can hold material witnesses if they can prove their testimony is critical to a criminal case and if they are deemed a flight risk.

The authorities allegedly forced her to remove her hijab and allowed her to wear only a short-sleeved shirt, going against her Muslim beliefs.

The statement says she was also denied halal (adhering to Islamic law) food, "being offered only pork as a meal and not even bread", and as a result ate just a packet of crackers after her apprehension.