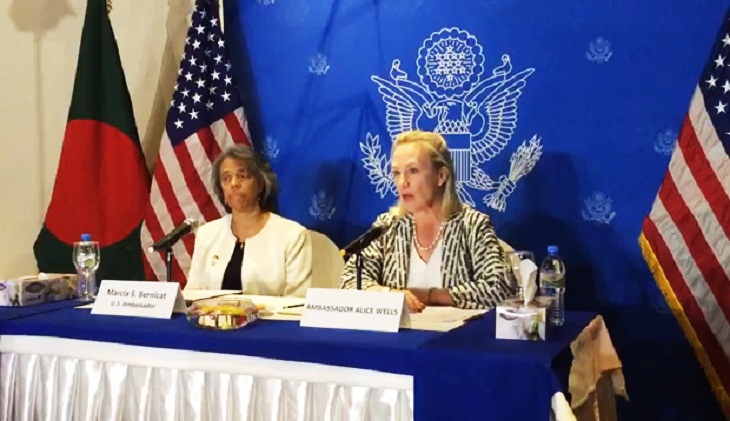 The United Sates (US) has said they continue to call on the government of Bangladesh to protect the fundamental civil liberties, especially the freedom of speech and press.

“We support freedom of expression and freedom of media everywhere, including Bangladesh,” US principal deputy assistant secretary for the Bureau of South and Central Asian Affairs Alice Wells told a press conference at a city hotel on Monday evening.

Sharing US’ concern over recently enacted Digital Security Act (DSA), Wells said obviously the digital security surrounding social media and internet is a very serious issue around the world in terms of how to establish reasonable safeguard.

She hoped that there will be a dialogue between the government and civil society on how to improve the legislation.

The US also urged the government of Bangladesh to fulfill its commitment to hold “free, fair, credible and participatory” elections that reflect the will of the Bangladeshi people.

“With a dynamic and fast-growing economy, Bangladesh’s future success will be fueled by strengthening of its democratic institutions and governing structures,” she said mentioning that is why she conveyed this during her meetings in Dhaka.

Wells said they encourage the government of Bangladesh and the Election Commission to take all necessary steps and mentioned that it is deeply in Bangladesh’s interest to have free and fair elections.

Asked about the impression that the US government is backing Dr Kamal Hossain-led initiative, Wells said they support the democratic process but not a particular party or alliance over another party.

The US principal deputy assistant secretary said they will continue their call on Myanmar to create necessary conditions for Rohingyas to return voluntarily to their former places in safety and with dignity.