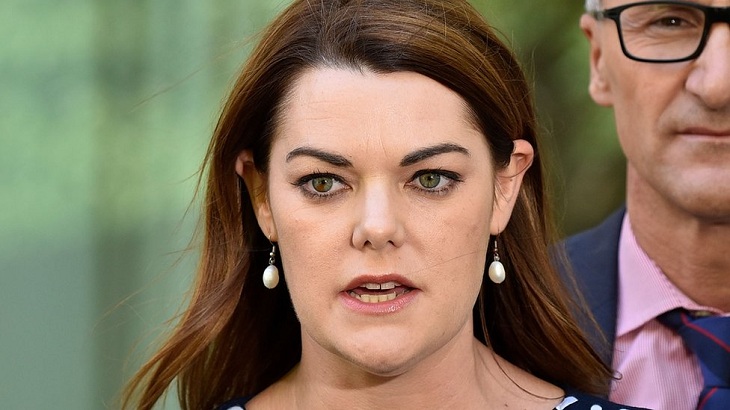 Australian senator Sarah Hanson-Young has filed a lawsuit against a political opponent who made "sexist slurs" towards her.

The Greens senator, 36, is the first Australian sitting politician to sue another for defamation.

She alleges Senator David Leyonhjelm made "defamatory statements" about her personal life in parliament and in the Australian media.

Mr Leyonhjelm, 66, has said he will strenuously defend himself.

The Liberal Democrat senator was widely criticised in June after he told Ms Hanson-Young to "stop shagging men" during a debate in the Senate about curbing violence against women.

After Ms Hanson-Young spoke out about the remarks, he repeated similar comments in television and radio interviews.

'I'm calling this out'

Ms Hanson-Young said Mr Leyonhjelm's comments were an attack on her character and had caused considerable harm to her family.

"I'm calling this out because it is wrong," she said in a statement on Thursday.

"No woman, whether she be working behind a bar, in an office or in the Parliament, deserves to be treated this way, and it needs to stop."

The feud between the two senators has prompted renewed public discussion about sexism in Australian politics. Women make up less than third of parliament.

Lawyers for Ms Hanson-Young filed proceedings in the Federal Court of Australia on Wednesday. The senator said she would have preferred an apology rather than legal action.

Mr Leyonhjelm has consistently refused to apologise, despite calls to do so from other politicians including Prime Minister Malcolm Turnbull.

He has said his comments in the Senate were in response to Ms Hanson-Young saying "words to the effect that all men are rapists". Ms Hanson-Young has strongly denied making any such statement.

Both senators have had online fundraisers set up for them by members of the public to help pay legal fees.

The Greens senator has pledged to donate any damages she wins to women's charities.

Get the best knowledge of Australia: PM to Bangladeshi students