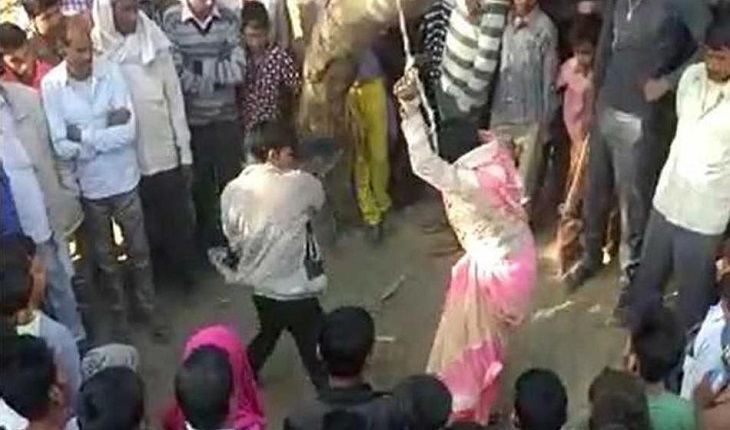 A wife was tied to a tree and beaten with a leather belt while dozens of men watched on and did nothing.

She was allegedly flogged 100 times by her husband following a 'kangaroo court' ruling that she was guilty of adultery .

The attack, which happened in Bulandshahr, Uttar Pradesh near Delhi in India, saw the unidentified woman beaten unconscious, reports the Mirror.

The 73-second video shot on a mobile phone shows a saree-clad woman’s hands tied to an overhead branch of a tree while she is beaten with a leather belt by a man in a green shirt and a jacket.

Hauntingly, the woman can be heard screaming in pain after each hit.

She was reportedly sexually assaulted by members of the crowd afterwards while unconscious.

A large crowd of men can be seen standing in a circle to watch the beating and some of them can even be heard berating the woman.

Local reports allege that the woman was being beaten by her husband after a ‘kangaroo court’ run by a local village leader found her guilty of adultery.

Police say three people involved in organising the attack, including the woman's husband and son, have been arrested. They said they were investigating 30 other people who had watched the event.

In a statement the police said: ‘We found out about the incident yesterday.

‘We called the woman, spoke to her and registered a case. We have arrested the husband, the panchayat pradhan (village headman) and his son. We have filed a case against 20 to 25 unknown people.’