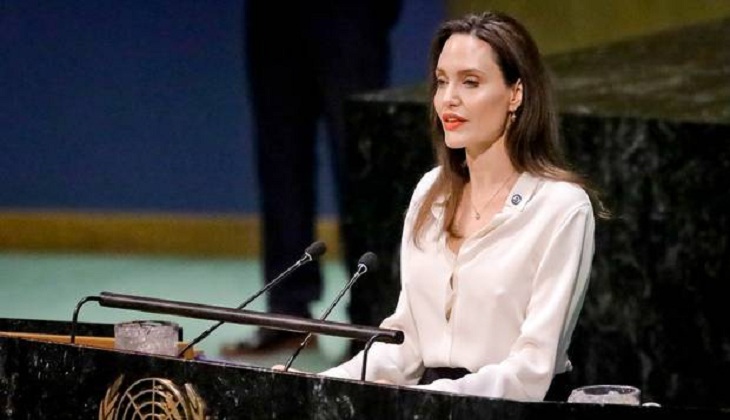 Actress and activist Angelina Jolie warned Friday that the world "will remain stuck in a cycle of violence and conflicts" as long as nations continue to put almost every other issue ahead of women's equality, rights and participation.

Jolie, who is a special envoy for the U.N. refugee agency, added in a keynote address to a ministerial meeting on U.N. peacekeeping that "denying half a population representation in peace negotiations or in government is not the route to long-term stability."

There are many examples around the world of successful and inspiring women, she said, "but women and girls are still the majority of the victims of war," over half the world's refugees, and "the vast majority" of victims of rape and sexual violence.

If the world accepted the principle that those affected by a problem should be charged with determining a solution, Jolie said, "then the majority of the world's peace negotiators, foreign ministers and diplomats would be women."

But she quickly said: "We all know the reality."

The reality, Jolie added, is that unequal power relations, "abuse of power, gender bias, violence and lack of justice" have kept many women in a subordinate and vulnerable position internationally.

In her speech to the annual meeting of foreign and defense ministers, the Oscar-winning actress focused primarily on women, but she also talked about the importance of multilateralism and the growing refugee crisis.

Declaring herself a patriot who loves the United States, Jolie said she believes "in an America that is part of an international community."

"Countries working together on an equal footing is how we reduce the risk of conflict," she said. "It is how we avoid the need to send the men and women of our militaries to fight and sacrifice overseas."

But Jolie said "we live at a time of blatant disregard for the laws of war that forbid attacks on civilians."

She pointed to missile strikes on schools and hospitals, families bombed in their homes, chemical weapons dropped on neighborhoods, besieged areas unable to get aid, and mass rapes.

"We seem incapable of upholding minimum standards of humanity in many parts of the world," Jolie said. "That this comes at a time when humankind is richer and more technologically advanced than ever before is all the more painful."

She recalled that there were fewer than 20 million displaced people and the numbers were falling when she started working with the U.N. refugee agency UNHCR.

"Today there are over 65 million people displaced, and the numbers are rising," Jolie said.

"More countries are experiencing some form of violent conflict today than at any time in the last 30 years," she said.

And U.N. peacekeepers are often required to serve where there is no peace to keep and often represent "the last and only hope for millions of people facing daily threats to their safety and their basic rights," she said.

While progress has been made in reducing the number of cases of alleged sexual exploitation and abuse in U.N. peacekeeping missions and increasing the number of women peacekeepers, Jolie said, "there is still a long way to go."

Peacekeepers who commit violations must be investigated and prosecuted, she said, and there must be no impunity for crimes committed against women and girls during conflict.

Above all, Jolie said, the world needs to understand "that women are themselves protectors: As mothers. As peacekeepers. As human rights defenders."

"Think how much more we could achieve with women's equal participation in all aspects of society: not at the expense of men, but alongside men," she said. "Because we are all partners in this life."