The definition of Kilogram has changed 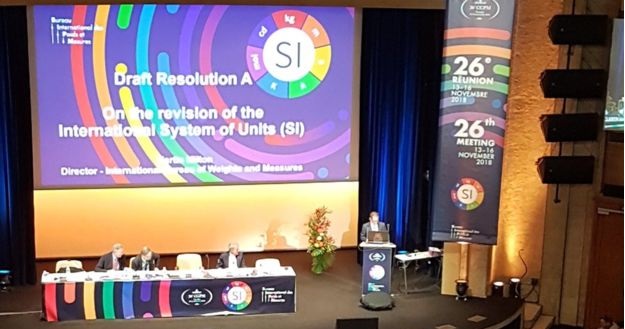 Scientists have changed the way the kilogram is defined.

Currently, it is defined by the weight of a platinum-based ingot called "Le Grand K" which is locked away in a safe in Paris.

On Friday, researchers meeting in Versailles voted to get rid of it in favour of defining a kilogram in terms of an electric current.

The decision was made at the General Conference on Weights and Measures.

But some scientists, such as Perdi Williams at the National Physical Laboratory in the UK, have expressed mixed feelings about the change.

"I haven't been on this project for too long but I feel a weird attachment to the kilogram," she said.

"I think it is such an exciting thing and this is a really big moment. So I'm a little bit sad about [the change]. But it is an important step forward and so the new system is going to work a lot better. It is also a really exciting time, and I can't wait for it to happen."

Why kill off the kilogram?
Le Grand K has been at the forefront of the international system of measuring weights since 1889. Several close replicas were made and distributed around the globe.

But the master kilogram and its copies were seen to change - ever so slightly - as they deteriorated.

In a world where accurate measurement is now critical in many areas, such as in drug development, nanotechnology and precision engineering - those responsible for maintaining the international system had no option but to move beyond Le Grand K to a more robust definition.The change was approved at the General Conference on Weights and Measures

How wrong is Le Grand K?
The fluctuation is about 50 parts in a billion, less than the weight of a single eyelash. But although it is tiny, the change can have important consequences. Coming in is an electrical measurement which Dr Stuart Davidson, head of mass metrology at NPL, says is more stable, more accurate and more egalitarian.

"We know from comparing the kilogram in Paris with all the copies of the kilogram that are all around the world that there are discrepancies between them and Le Grand K itself," he said.

"This is not acceptable from a scientific point of view. So even though Le Grand K is fit for purpose at the moment, it won't be in 100 years' time."

How does the new system work?
Electromagnets generate a force. Scrap-yards use them on cranes to lift and move large metal objects, such as old cars. The pull of the electromagnet, the force it exerts, is directly related to the amount of electrical current going through its coils. There is, therefore, a direct relationship between electricity and weight.

So, in principle, scientists can define a kilogram, or any other weight, in terms of the amount of electricity needed to counteract the weight (gravitational force acting on a mass).

Here's the tricky part
There is a quantity that relates weight to electrical current, called Planck's constant - named after the German physicist Max Planck and denoted by the symbol h.

But h is an incredibly small number and to measure it, the research scientist Dr Bryan Kibble built a super-accurate set of scales. The Kibble balance, as it has become known, has an electromagnet that pulls down on one side of the scales and a weight - say, a kilogram - on the other.

The electrical current going through the electromagnet is increased until the two sides are perfectly balanced.

By measuring the current running through the electromagnet to incredible precision, the researchers are able to calculate h to an accuracy of 0.000001%.

This breakthrough has paved the way for Le Grand K to be deposed by "die kleine h".

What are the advantages of the new system?
Every few decades, all the replica kilograms in the world had to be checked against Le Grand K. The new system, now that it's been adopted, will allow anyone with a Kibble balance to check their weights anytime and anywhere, according to NPL's Dr Ian Robinson.

"It feels really good to be at this point. I feel it is the right decision. Once we've done this it will be stable for the foreseeable future," he said.