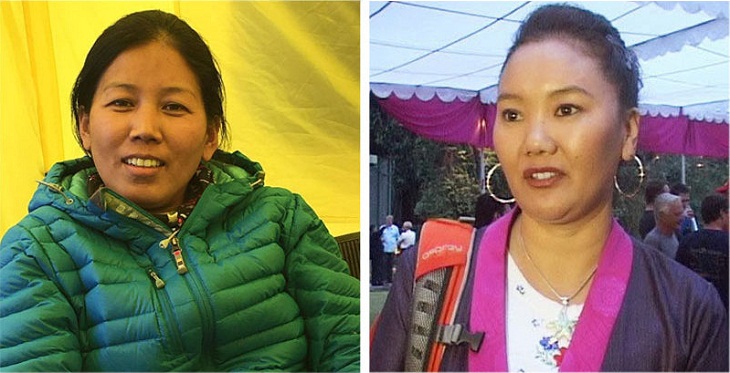 The only female high-altitude worker Maya Sherpa has successfully climbed the world’s highest peak becoming the first Nepali woman to climb Mt Everest from Nepal side this spring season, while Lhakpa Sherpa, an avid female climber, has also set a world record by summitting the mountain seven times from the north side on Friday.

Shiva Bahadur Sapkota, a liaison officer, said that 36-year-old Maya, who is also the president of Everest Summiteers’ Association, stood atop the Mt Everest at around 7:00 am along with a team of climbers managed by Seven Summit Treks. Maya also holds the record of the first  Nepali woman to climb Everest from both the sides.

Born in Okhaldhunga district, Maya had also summitted Mt K2, the second highest mountain in the world in 2014.

Maya was the only female Nepali mountain guide who obtained permit from the Department of Tourism to attempt to climb the Mt Everest this season, Sapkota added.

Similarly, Lhakpa (43) from Makalu -7, Sankhuwasabha also climbed Mt Everest for the seventh time. She had chosen Tibet side for her expedition.

With today’s success, she broke her own record.

“She broke her own world record of six-time Everest summiteer in female category after reaching the summit from Tibet side at around 5:00 am,” Bachchu Shrestha, Executive Director at Pasang Lhamu Sherpa Memorial College informed.

Lhakpa had climbed Mt Everest from the south side in 2000 while she stood atop the summit for six times from Tibet side.

According to Gyanendra Shrestha, an official at the Department of Tourism, more than 50 mountaineers have scaled the world’s highest peak on Friday while more than 70 mountaineers are still on the way to summit.

“More than 50 climbers – both foreigners and Nepalis – have already stood atop the Mt Everest,” Shrestha shared the updates that he received till 12:30 pm.

More climbers are on the way to the roof of the world. As many as 126 climbers, including 70 Nepali guides, planned to make the summit attempt on Friday, he told THT Online over phone from the base camp.

Earlier, At least 120 Nepalis and 82 foreigners had made it to the top of Mt Everest, successfully on a single day on Wednesday, the ninth day after climbers were allowed to climb the mountain after the closure of around two years following back-to-back disasters, according to Shrestha.

At least 13 climbers, including six army personnel of an expedition team from the United Arab Emirates, also reached the roof of the world. Their success also coincided with the opening of UAE Embassy in Kathmandu, Bibhu Chand Thakur, Managing Director at Himalayan Holidays said. “They are expected to descend to Camp II by this evening,” he added.

Jiban Ghimire, Managing Director at Shangri-La Nepal Treks said that five members including three foreigners of the Alpine Ascents International team stood on the top of Mt Everest on Wednesday.

According to Pemba Sherpa, Manager at Seven Summit Treks, 32 climbers including 13 foreigners from his company scaled the mountain till Friday.

At least 88 climbers, including 52 Nepalis, had successfully climbed the world’s highest peak till May 16 after nine Sherpas opened the summit route on May 9 becoming the first Nepali group to summit Mt Everest in the season.

According to Shrestha, at least 42 mountaineers, including 21 foreigners, have their plans to attempt to climb Mt Everest for Saturday.

DoT issued permits to 289 mountaineers of 34 teams to climb Mt Everest along with their over 400 high altitude workers this season.

Meanwhile, multiple summits have been reported from the north side (Tibet side) as a fair window allowed climbers make a final summit push today.