Media role effective to end violence against women and children 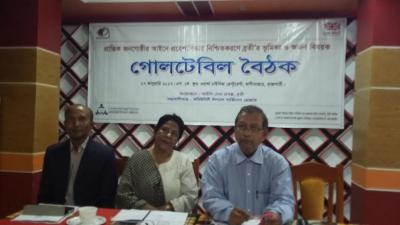 Development activists and media personnel at a round-table meeting here on Friday said that media has a vital role to end violence and repression against poor and marginalised women besides building their self-confidence and dignity.

They viewed balanced society could be established through ensuring human rights. Social initiative is also very important to protect the dignity of marginalized population.

It is time to remove the social disparities and other social crimes like gender discrimination, child marriage and violence against women. So, the media people would come forward and work together towards eliminating the social crimes.

These views were expressed in a round-table meeting held in the city with media personnel styled "Expectation from Media Personnel towards
ensuring access to justice of Marginalised communities".

During his concept paper presentation, Shashanka Boron Roy, Coordinator of the project, said main thrust of the project is to improve access to justice and existing legal service procedure for un-served population like poor and extreme poor ethnic minority.