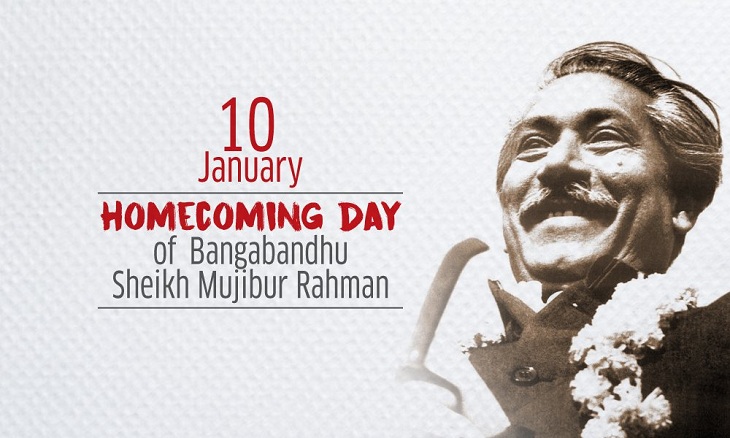 The historic Homecoming Day of Father of the Nation Bangabandhu Sheikh Mujibur Rahman will be observed today in a befitting manner.

Bangabandhu, the undisputed leader of the nation and supreme commander of the country’s Liberation War, returned to the sacred soil of independent Bangladesh via London and New Delhi on January 10 in 1972, after 290 days of captivity in Pakistan jail.

To mark the day, the ruling Awami League, its associate bodies, other political parties and socio-cultural-professional organisations have chalked out elaborate programmes.

The day’s programme will start with hoisting of the national and party flags at the AL central office, Bangabandhu Bhaban, and party offices across the country around 6:30am. AL leaders and workers will place wreaths at the portrait of Bangabandhu at Bangabandhu Bhaban in Dhanmondi here at about 7 am.

Prime Minister and Awami League President Sheikh Hasina is expected to chair a discussion at Krishibid Institution Bangladesh (KIB) in the city’s Farmgate area at 3pm today. Besides, Bangali Sangskritik Bandhan, a cultural alliance, will hold a discussion at Shilpakala Academy at 10 am today.

In a statement, Awami League General Secretary and Road Transport and Bridges Minister urged all party leaders and like-minded political organisations to observe the day in a befitting manner.

“Today is the historic 10 January, the Homecoming Day of Father of the Nation Bangabandhu Sheikh Mujibur Rahman. Though we achieved ultimate victory on 16 December in 1971 through armed struggle but the true essence of victory came into being upon returning home of Father of the Nation,” Hamid said in his message.

This year the Homecoming day is more significant than any other time as the people of the country have cast their votes for Sheikh Hasina, the daughter of Bangabandhu, to run the country for the three consecutive terms and materialize the dream of Bangabandhu through the 11th parliamentary election, he said, adding “I believe that this is the true reflection of deep trust and confidence in Bangabandhu and the Prime Minister Sheikh Hasina”.

Recalling the memories on January 10, 1971, the President said in front of hundreds of thousand people gathered at the Racecourse Maidan, he (Bangabandhu) said, “The dream of my life is fulfilled today. My Sonar Bangla is now free….a sovereign state has been emerged”.

The anti-liberation forces, however, wanted to wipe out the ideal and principle of Bangabandhu and tried to tarnish the image of sovereign Bangladesh through the assassination of Bangabandhu and his family members on 15 August 1975, Hamid said.

“But the Bangali is a nation of intrepidity. As long as Bangladesh and the Bangali exist, Bangabandhu will remain as the eternal source of our inspiration,” he added.

The President said the present government under the dynamic leadership of Prime Minister Sheikh Hasina, the illustrious daughter of Bangabandhu, is making untiring efforts for the progress and development of the country.

“Bangladesh, in the meantime, is now being considered worldwide as a ‘role model’ for its development in various sectors including education, health, agriculture, information technology, empowerment of women etc. I am confident that with this pace of development, Bangladesh will be a developed country by 2041, InshaAllah,” he added.

“On the Homecoming day of Bangabandhu, let us take the pledge to continue the advancement of our country by implementing the unfinished tasks of this great leader imbued with the spirit of War of Liberation,” Hamid said.

In her message, Prime Minister Sheikh Hasina said under the undisputed leadership of Bangabandhu, the Bangali nation earned the ultimate victory waging the nine-month solemnly-vowed war.

“The defeated Pakistani rulers were compelled to free Bangabandhu. The Father of Nation returned to the independent Bangladesh on the 10 January 1972,” she said, adding that while speaking before a mammoth gathering at the then Racecourse Maidan on the day, he (Bangabandhu) narrated the inhuman torture of the Pakistani military junta meted out on the people of Bangladesh.

After his return, the Father of the Nation devoted all his efforts to rebuild the war-ravaged Bangladesh, Sheikh Hasina said, adding that as Bangabandhu Sheikh Mujib had engaged himself in the struggle to build a “Golden Bangladesh” reconstructing the war-torn country, the anti-liberation forces in collusion with the war criminals assassinated Bangabandhu along with most of his family members.

Through the heinous killings of the 15 August 1975, they initiated the politics of killings, coup and conspiracy and obstructed the process to try the killers of Bangabandhu Sheikh Mujib through promulgating Indemnity Ordinance, she said.

Referring to Awami League’s landslide victory in the December 30 polls, Sheikh Hasina said “We will fully honour the huge mandate that the people of our country have given to us. We will turn Bangladesh into a middle-income country by 2021 and a developed one by 2041, InshaAllah”.

On the night of March 25, 1971, Pakistan army arrested Bangabandhu from his Dhanmondi residence and sent him to a West Pakistani jail the following day.

Bangabandhu was subjected to inhuman torture in the Pakistan jail where he had been counting moments for the execution of his death sentence that was pronounced in a farcical trial.

“I was a prisoner in the condemned cell awaiting hanging. From the day I went into jail, I didn’t know whether I was to live or not. I was mentally ready to die. But I knew Bangladesh would be liberated,” Bangabandhu spoke emotionally of his ordeal in Pakistani prison at a news conference in London.

On the Pakistani army’s slaughter of Bengalis, “Mujib declared: “If Hitler could have been alive today, he would be ashamed.”

Earlier on March 26 in 1971, Bangabandhu proclaimed independence of Bangladesh and urged people from all walks of life to participate wholeheartedly in the nation’s War of Liberation.

Immediately after the proclamation of independence, Bangabandhu was arrested by Pakistani military junta and then flown to West Pakistan to keep him in prison there.

Though the final victory in the nine-month-old War of Independence was achieved defeating Pakistani occupation forces on December 16 in 1971, the nation’s expectations were fulfilled and the people got the real taste of victory with the homecoming of Bangabandhu on January 10 in 1972.

On reaching Dhaka (Tejgaon) airport in the afternoon on January 10, Bangabandhu was greeted by tens of thousands of jubilant people who had been eagerly waiting to see the beloved leader since the final victory on December 16 in 1971.

From airport Bangabandhu was moved to the Racecourse Maidan (now Suhrawardy Udyan) where he addressed a spontaneous reception accorded to him by the cheerful countrymen believed to be one million. He recalled with respect the contribution of all during the war and urged the people to rebuild the war- ravaged country.

Bangabandhu took oath of office as the country’s Prime Minister on January 12, 1972.

In a statement, Awami League General Secretary and Road Transport and Bridges Minister Obaidul Quader urged leaders and workers of the party and associate bodies to make all programmes of the day a success.