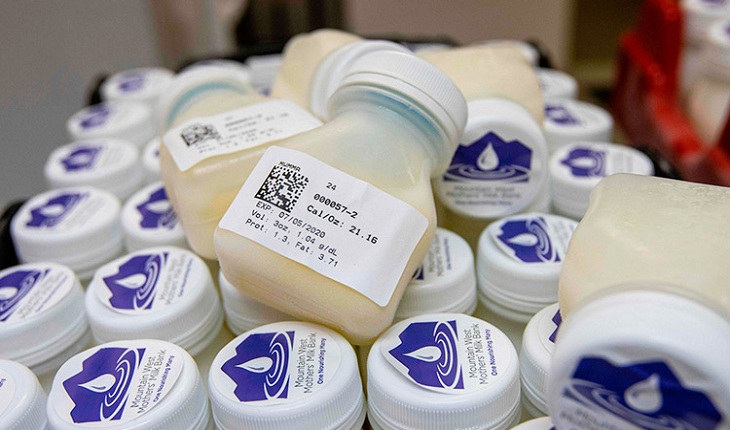 In a world where sharing is so popular it has its own economy, women in Utah have a new item to contribute: breast milk.

The Mountain West Mothers' Milk Bank is the first of its kind in Utah, the US state with the highest birth rate and therefore great need, as well as a wealth of potential milk donors.

"This is my little piece of helping someone else. My body can do it, so I will do it," she said.

Thompson had realised she was a prolific milk producer when she had her first two children -- she used to pump excess milk and save it in her freezer, before ultimately throwing it out as she ran out of space to store food.

A few years later, when her niece was in the hospital and needed milk, she learned that donating was possible.

So when she had her daughter in March, she posted on Facebook to inquire if anyone needed extra. She was connected to the milk bank and after undergoing a health screening, including a blood test, Thompson became a donor.

Nearly 10 per cent of babies born in the United States are premature, and the bulk of the milk collected by the bank goes to nourish infants in neonatal intensive care.

Breast milk is valued above formula for newborns because it contains a range of vitamins, minerals, fatty acids, immune factors, antibodies and stem cells.

"It primes the gastro-intestinal tract, so those babies get protections from infections from the get-go," said Mariana Baserga, who runs the University of Utah's neo-natal intensive care unit.

Once the Utah bank receives milk from donors, it is pooled, pasteurised and packaged in doll-sized three ounce containers to be shipped out to hospitals across Utah and neighboring Idaho.

"That's what they are doing, saving lives," he said. "It's an act of selfless service to pump and to provide breast milk and to do it for hours and days and months.

"They do it without any payment. It's an act of pure love."

In the 1980s when the AIDS epidemic hit, it had a devastating impact on milk banks in North America and around the globe.

"They closed overnight because people were worried," says Naomi Bar-Yam, formerly on the board of directors of the Human Milk Banking Association of North America (HMBANA).

At the time there were between 50 and 60 milk banks in the United States and Canada, but within a very short time there were only a half dozen left. Those figures have since partially recovered -- with 26 accredited milk banks now operating nationwide.

That episode was the catalyst for the founding of HMBANA, the professional organisation that sets guidelines for the safe collection and dispensing of human milk -- and whose standards are now used across the globe.