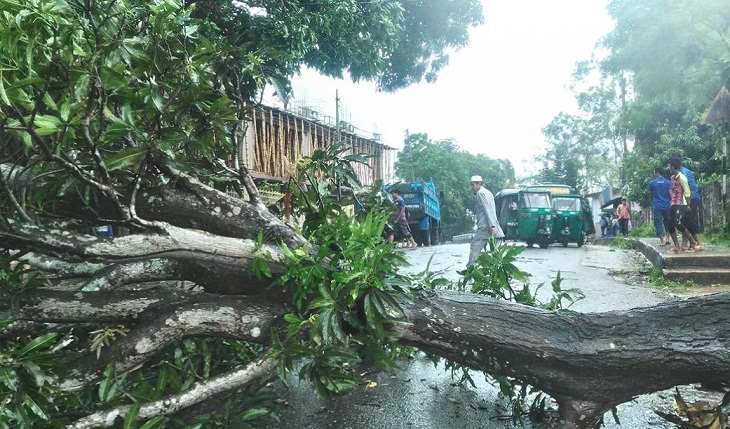 At least five people died in Cox’s Bazar and Rangamati as Cyclone Mora made landfall today and crossed the coast of Chittagong, showing signs of weakening with reduced wind speed and rainfall.

Met office says, the bad weather will persist today. There will be improvement tomorrow. The ‘severe cyclonic storm’ will weaken gradually and reduce to a depression as it moves further north.

The cyclone that made landfall near Kutubdia around 6:00am did not prove to be as devastating as feared. Last known, the storm was moving across the coastal areas of Chittagong.

Two people died in Chokoria, hit by trees and buried under a collapsed house, and another in Cox’s Bazar Sadar, said Ruhul Amin, divisional commissioner of Chittagong.

Cyclone Mora, that lashed Chittagong with wind speed of 128 kmph eased up in the afternoon, our local staff correspondents report. The rain had subsided to moderate.

In Cox’s Bazar, two villages were inundated in Moheshkhali upazila and over 1,000 people evacuated and taken to cyclone centre this morning, said Tamilur Rahman, an executive magistrate.

Coastal areas in Chittagong, Cox’s Bazar, Noakhali, Laxmipur, Feni, Chandpur and their offshore islands and chars are still under the highest alert with danger signal 10.