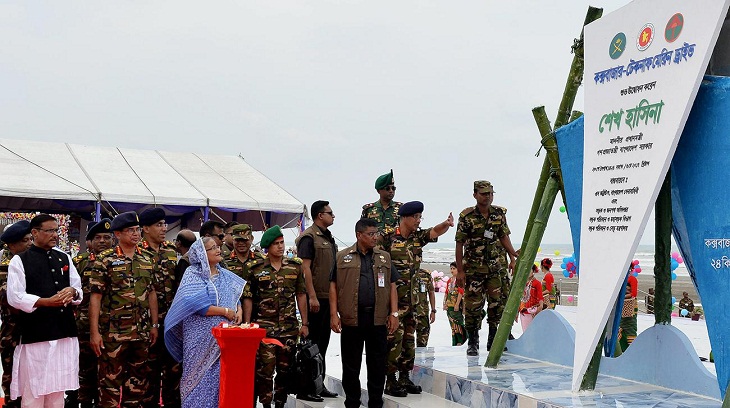 Road, Transport and Bridges Minister Obaidul Quader and Civil Aviation and Tourism Minister Rashed Khan Menon accompanied the prime minister around 11:30 am at Inani Beach in the inauguration ceremony of the much-awaited marine driveway.

Earlier around 10:15 am, the prime minister launched the formal operation of 737-800 Boeing aircraft on the expanded runway of the Cox's Bazar International Airport.

Sheikh Hasina arrived in the Cox’s Bazar airport in the Boeing of Biman flight around 10 am which is the first flight of a wide-bodied Boeing in the airport.

The marine drive road was constructed by Bangladesh Army and Road under supervision of Highways Department (RHD) of Road, Transport and Highways Division (RTHD).

Project inspector Lieutenant Colonel KM Mehedi Hasan said that the Cox Bazar-Tekhnaf Marine Drive is the largest of its kind in the world which is 80 kilometer in length.

In the afternoon, Sheikh Hasina, also the president of Awami League, is scheduled to address a rally organized by Cox's Bazar District Awami League at Sheikh Kamal International Cricket Stadium.