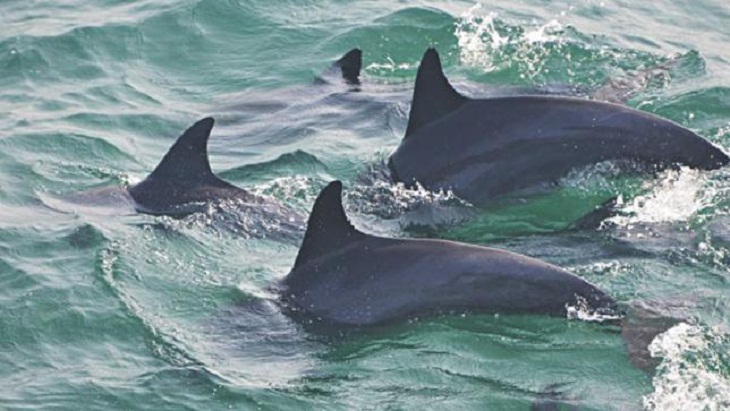 A group of Dolphin at the Swatch of No-Ground in March. Photo: Isabela Foundation

Isabela Foundation, a philanthropic organisation working for nature conservation, in collaboration with Bangladesh Navy went on an expedition to Swatch of No-Ground in the Bay of Bengal in March to learn about the marine biota.

Swatch of No-Ground has a comparatively flat floor five to seven kilometres wide. At the edge of the shelf, depths in the trough are about 1,200 metres. It is globally famous for its cetaceans (whales, dolphins and porpoises) population.

Based on secondary information gathered from literature review, an orientation was conducted to sensitise the 13-member Isabela team “Quest for Sea and Life” in the capital prior to the voyage. Team leader Kabir Bin Anwar, director general at the Prime Minister's Office, and this author informed the team about the mission.

The team started the journey from Dhaka in the evening of March 22. The next morning it was welcomed by a school of Ganges River Dolphin breaching estuarine waters in Dhaingmari dolphin sanctuary at the Passur river.

Karotoa, a Bangladesh Navy ship that carried the team, left Mongla naval base later that morning and cruised through the Sundarbans to the destination. An introductory session about the mission, cruise route, methodology and safety aspects were conducted onboard by Kabir Bin Anwar, Sabbir, commander of Navy, and Shams, the captain of the ship.

The team was well equipped with necessary marine research gears and its members were from marine ecology, under water exploration, hydrology, ornithology, fisheries, blue economy and marine navigations. It was supported by a naval contingent of 80 members onboard.

The team members started taking notes of the field observation while cruising through the Sundarbans en route to Akram Point down to Hiron Point. It was very exciting to watch nature from the ship and the team stumbled upon different species of wild flora and fauna.

The bank of the river was full of diversity in floral composition which usually looks clustered of a specific plant community in each section, like Keya (pandanus) and Tiger fern; Golpata (Nipa palm); Sundari (Hereteria), Baen (Avicennia) groves; Keora (sonneratia); Geoa and Goaran community and so on.

Spotted dear were seen browsing at the open floor of Keora forest; monkeys on the fruiting trees like Baen and Choil; White-bellied Sea Eagle perching on the top of a tall Keora tree; Lesser Adjutant stork and Osprey together with other shorebirds wading at the open mudflats and sand dunes; Crested Serpent Eagle, Grey-headed Fish Eagle and Kestrel soaring up high; Ringed lizard on the crevices and tree holes along the bank of canals and rivers. Groups of Irrawaddy dolphins and Indo-Pacific Humpback dolphins were also seen leaping in the channel between Hiron Point and Akram Point.

It was the early morning of March 24 when the team found a pair of Bryde's whale splashing water fountain through their blow-hole. The sky was clear, the wind and the waves were modest and the water was blue at that time.

Everyone was exhilarated and feeling lucky to see the giant whale. The watchers on board were busy taking photos. The ship reduced its speed to avoid collision and maintained a safe distance so that the whales would not get annoyed.

We used binoculars and telescopes to track down marine lives. Crews of two TV channels also recorded videos. Our team members were given specific spots at the ship and asked to watch wildlife and keep records. The team took more than 2,000 images of Swatch of No-Ground. Later, all photographs were thoroughly checked and the images of species were identified. One such rare identification was Minke whale.

The common Minke whale (Balaenoptera acutorostrata) is the smallest baleen whale in the North Pacific. It is 7.5 metres in length when it is fully grown. It is known to feed on small schooling fish and invertebrates. It has 50 to 70 throat grooves on the underside of its body which can extend considerably when engulfing prey. Minke whales are most often solitary.

The masked booby (Sula dactylatra) is a large seabird of the booby family “Sulidae”. This species breeds on islands in tropical oceans, except in the eastern Atlantic. It is also called the masked gannet or the blue-faced booby. The team first spotted and photographed the bird flying over Swatch of No-Ground on March 24.

A pair of live conch univalve mollusc got entangled in the fishing net. They were collected for identification and reference. The Isabela taxonomic group studied the specimen and identified them as Mirabilistrombus listeri (Gray, 1852), a group of conchs that are sometimes referred to as “true conchs”.

Swatch of No-Ground is a mysterious submarine canyon in the Bay of Bengal which is geologically, hydrologically and ecologically unexplored marine ecosystem on earth. A part of it was announced as the country's first Marine Protected Area (MPA) by the Ministry of Environment and Forest.

It spans approximately 672 square miles (1,738 square kilometres) and is more than 900 metres in depth in some locations. The area is a key breeding and spawning ground for dolphins, whales, sharks and turtles. The marine protected area was declared for the long-term protection of cetaceans that inhabit the waters offshore of Bangladesh.