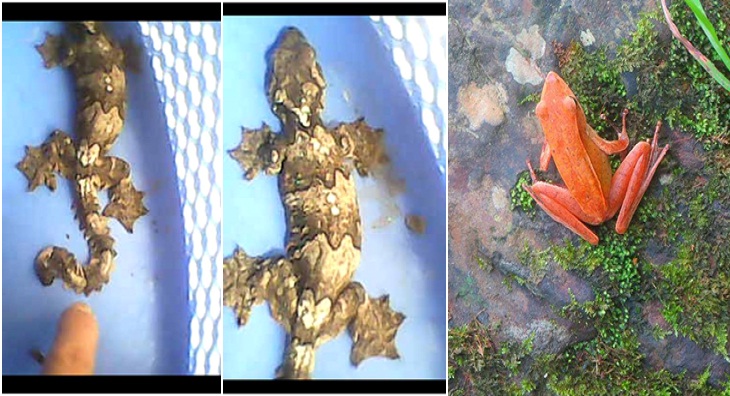 During recent wild watch one species of rare flying gecko and other dancing frog sighted from Chittagong Hill Tracts those are thought to be first sightings as well as new records for Bangladesh. Nature enthusiast Mr.Mohammed Zahed Razu first encountered and photographed the dancing frog from Tabalang double stream and Mr. Thuingching Marma capture the image of flying gecko.

While wild watch at hills , Mr. Hossain Sohel, senior reporter, wildlife and environment of Ekattor television collected the images and forwarded to me for identification of the species. After a through literature search and using the taxonomic keys of SD Biju, Sonali Garg, KV Gururaja, Yogesh Shouche, Sandeep A Walujkar, those who through DNA Bar-coding first identified Dancing Frogs in India (Micrixalidae, Micrixalus) in 2014. I have confirmed both the species through taxonomic review.

Flying geckos are small, tropical lizards with extraordinary adaptations to suit their arboreal lifestyle. Flying geckos reach about 6 to 8 inches from tongue to tail tip. They feature prominent skin flaps along their sides, tail and feet. Though the color and pattern vary greatly from lizard to lizard, most are incredibly well camouflaged and blend in superbly with their habitat; a quality that helps them to avoid predators. Though the skin flaps likely help the lizard's camouflage, a 1976 study by Dale L. Marcellini and Thomas E. Keefer, published in "Herpetologica," found that camouflage was not the primary purpose of the flap -- rather, the flaps evolved to enable gliding behavior.

Flying geckos are not capable of true powered flight. Rather, they will extend their legs and tails, maximizing their surface area, and passively glide from tree to tree. Though flying geckos don’t have control over their "wings" like flying dragons (Draco sp.) do, they have similar surface area and flight capabilities, as was shown in a 2001 study by Anthony P. Russel et al. and published in the "Journal of Morphology." Parachute geckos are cryptic, forest-dwelling lizards. Patterned in greys or browns and possessing blotches and wavy dark lines on their bodies, they are good at concealing themselves on trunks and branches.

Micrixalus (commonly known as dancing frogs, tropical frogs, and torrent frogs) is a genus of frogs from that are endemic to the Western Ghats in India. They are monotypic within the family Micrixalidae. Before being raised to the family level they were classified as the subfamily Micrixalinae within Ranidae. Micrixalus frogs are popularly known as "dancing frogs" due to their peculiar habit of waving their feet to attract females during the breeding season. Dancing frogs are extremely vulnerable as their habitat is severely threatened.

Brilliantly brick-red colored used to live in the damp moss covered large boulder and its crevices. Dancing frogs are found in the vicinity of fast and slow moving perennial streams in the forests of the Western Ghats. Typical habitats include high altitude shoal forests, wet evergreen forests, Myristica swamps, and secondary forests. Both the genus and the family are also known by the epithets "tropical frogs" and "torrent frogs".
During the breeding season, male dancing frogs call from spots close to running water and display their prominent white vocal sacs. Males tap their hind feet and extend it, subsequently stretching the foot outward and shaking it, both at prospective mates and rival males. This type of hind leg movement has been termed as "foot-flagging" and has been observed in many, but not all, Micrixalus species and evidence inferred for a few other species as well .Foot flagging is done with either hind limb and also while calling. The mating pair enters the water where the eggs are fertilized. The female dancing frog excavates in the streambed with her hind limbs. The pair detach, the female lays her eggs in the chamber in the streambed and buries the spawn with sand and gravel using the hind limbs.