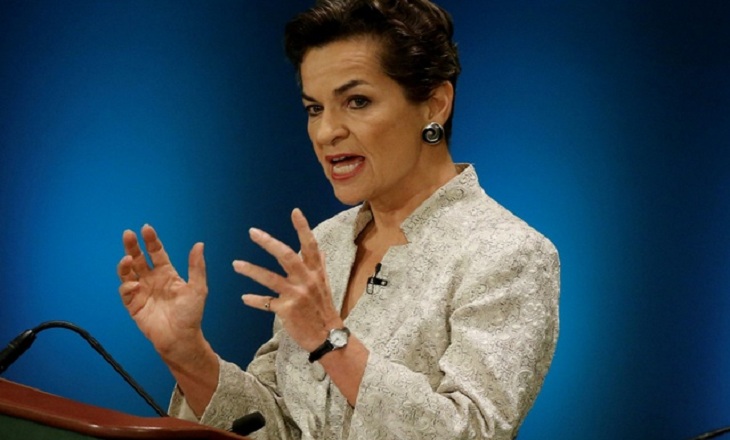 The world must limit global warming to 1.5 degrees to give vulnerable populations even a 50 percent chance of surviving the impact of climate change, the former United Nations climate chief said on Friday.

The 2015 Paris Agreement set a goal of limiting a rise in average world surface temperatures to "well below" 2 degrees Celsius (3.6 Fahrenheit) above pre-industrial times, while "pursuing efforts" for 1.5C (2.7F).

But a key architect of that agreement, Christiana Figueres, told a London conference a failure to cap warming at 1.5C would be disastrous.

"The reason why 1.5 degrees as a maximum temperature rise is absolutely crucial is because it is the only temperature that gives a 50 percent chance for the most vulnerable populations to survive the effects of climate change," she said.

"From where we stand today, I hear everyone think that's impossible. Well, you know what? We're just going to have to make it possible."

Figueres said a 2-degree rise would leave most of the low-lying Pacific islands, parts of Bangladesh, and all of New York city under water.

A 1.5-degree change would give vulnerable populations a chance of surviving climate shocks like flooding, cyclones, droughts and rising sea levels, she said.

"What do we do about 95 percent of the Pacific Islands going under water? That means those people have no home - talk about forced migration," she said at the conference on women and climate change hosted by Invisible Dust, an arts and science organisation.

Worldwide, seas have risen 26 cm (10 inches) since the late 19th century, driven by melting ice and the expansion of water warmed by climate change, UN data shows, and scientists predict a rise of another metre or more by 2100.

A 2-degree temperature hike would lead to more frequent weather-related disasters and displace large numbers of people, according to the Climate Vulnerable Forum, a coalition of the countries most affected by climate change.

Pacific island nations are most at risk from rising sea levels, with low-lying islands facing an existential threat as most - or all - of their land could disappear.

Last year, 18.8 million people around the world were forced from their homes by storms, floods, wildfires or other natural disasters, according to the Internal Displacement Monitoring Centre.

Given the devastating effects of climate change, Figueres said she was disappointed when US President Donald Trump vowed to pull the United States out of the Paris deal a year ago.

Trump's announcement that he was ditching the deal agreed upon by nearly 200 countries came over opposition by US businesses.

"To derive a conclusion that is completely contradictory to the path of history and to the interest of the US economy is actually quite sad," Figueres said.

The withdrawal would leave the US at a competitive disadvantage as global competitors shifted away from polluting fossil fuels, she added.

In December, countries will meet in Poland to set rules for the Paris accord's implementation, including how to monitor emissions.

PM receives Certification of Appreciation for implementation of Montreal Protocol