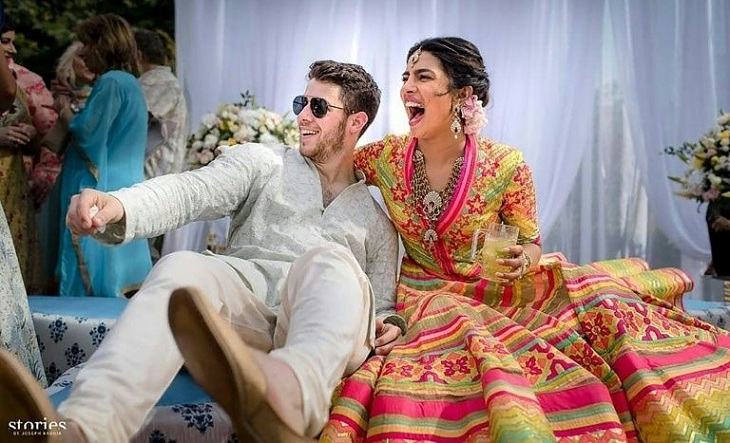 Bollywood actress Priyanka Chopra and American singer Nick Jonas hosted an extravagant concert Sunday for their star-studded wedding guests as the couple tied the knot at a lavish Indian palace.

Chopra, 36, and Jonas, 26 performed an opulent Indian music and dance routine as their friends and family clapped along at the Umaid Bhawan palace in the western city of Jodhpur.

The multi-day festivities dubbed India's "wedding of the year" continued into the night with a Hindu ritual for the superstar couple, who exchanged vows in a Christian ceremony Saturday night.

Chopra said the colourful "sangeet" performance, which featured ornate set changes and dozens of performers, started as a "fierce song and dance competition" between their musical families.

"And what a performance it was. Each family telling our stories through song and dance, filled with lots of laughter and love," she posted on Instagram Sunday.

They were married in India's fabled "Blue City" with famous guests including Jonas's brother Joe Jonas and his fiancee, British actress and "Game of Thrones" star Sophie Turner.

US fashion designer Ralph Lauren said the label had also been involved in the event's styling.

"Ralph Lauren is honored to have dressed the couple as well as the members of their wedding party," the designer posted on Twitter on Saturday.

The couple got engaged in August, sharing photos on social media showing them performing a prayer ritual in traditional Indian garb.

The wedding celebrations commenced with a traditional Indian "mehndi" ceremony, with Chopra's arms and legs painted with henna dyes.

The bride wore vibrant Indian colours while Jonas was dressed in an embroidered kurta, an elaborate tunic.

That ceremony was capped off with a vibrant fireworks show over the city of Jodhpur -- attracting some criticism online as Chopra is a vocal advocate for improving India's atrocious air pollution.

Chopra who won the Miss World pageant in 2000 -- is one of Bollywood's most identifiable stars and one of the few to have achieved success in the West.

She starred in the ABC thriller series "Quantico" and has released songs with US chart-toppers including Pitbull and The Chainsmokers.

Jonas first found success as a child star, as the frontman of The Jonas Brothers with his two siblings.

The brothers hailed from a deeply devout Christian family and presented a wholesome image, including wearing purity rings to promote chastity.

In recent years, however, Jonas revamped his image as well as turning to acting.