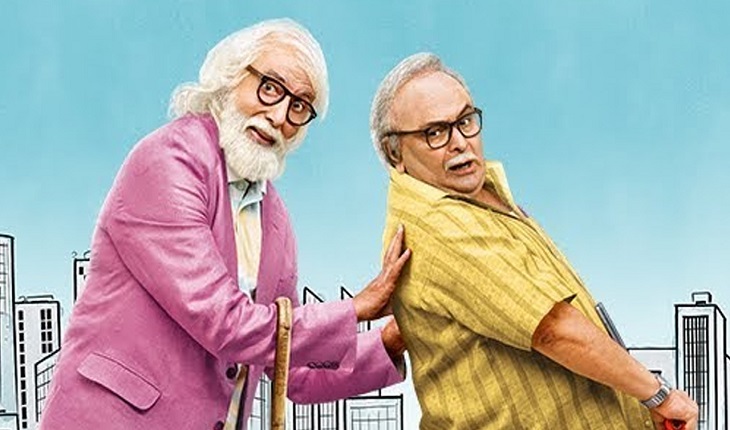 Director Umesh Shukla’s last outing, All is Well, was a disaster and was labelled as a bore-fest because his previous film, Oh My God, was critically acclaimed. Thankfully 102 Not Out is a light-hearted comedy and as sweet as it was touted to be.

Dattatraya Vakharia (Amitabh Bachchan), is physically 102 years old and mentally 26 (as introduced by Vijay Raaz in the film). His son is a 75 years old Babu (Rishi Kapoor) who has a monotonous pattern to his daily life; he sets a timer for 14 minutes in the shower because he believes that he will catch cold if he showers more than 15 minutes. Dheeru (Jimit Trivedi) works at nearby medical store but is mostly in Shanti Sadan – the house where both the protagonists lives. Dattatraya aka Kaka wants to break the world record of living 118 years and he realizes that he has to live with jolly people to achieve that but he has a son who is a quintessential boredom. So Kaka sets goals for his son Babu to complete so that Kaka is not compelled to send his son to an old age home and subsequently bring-in some entertainment in the Shanti Sadan.

The screenplay never deviates from the plot and that is a big plus point these days and the duration of 101 minutes of the film ensures that the films stick to plot. The film has its lows in scenes which seem a little farfetched like the dinner-outing scene in a Chinese restaurant where the whole eye-donation gag seems unnecessary. But most importantly the film has lot of high points like the letter reading scene which was shown in the trailers too. Saumya Joshi (Writer) does the right thing by keeping the story crisp and not boring people with a lot of stretched scenes. The character Dheeru was brilliant inclusion in such a script because he acts like an audience. his character ensures that half of the film is not just narration because goal-by-goal Kaka explains Dheeru every motive behind the goal spares any kind of silly fourth-wall-break moments.

The acting excels because two of the biggest acting powerhouses are in the film. Amitabh Bachchan and Rishi Kapoor entertain us when needed and make us feel their pain when needed. Kudos to the make-up team too for living up to the standards and expectations of the story. Jimit Trivedi falters at times but does a fair job to his role. Amitabh’s lip-sync sequence was the top-notch performance in the film as he smiles and dances to an old melody. The songs are not remember worthy and are a low point here.

Umesh Shukla provides a fun and sweet story about two oldies – one who hasn’t died till he is alive and other who was dead but is resurrecting himself. The film might not strike an impact on the young generation now but do take your parents to the film and you might just learn what they really need.

Sanju new poster out: Ranbir show how Sanjay looked when he came out of jail

Indian Bengali film Chalbaaz has hit cinemas across the country