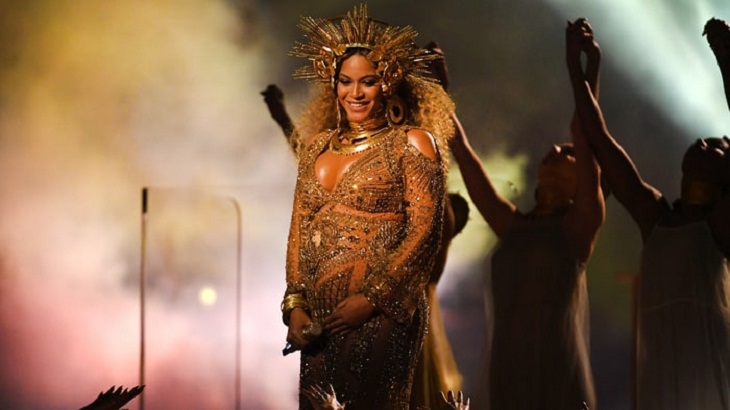 Pop diva Beyonce and her rap mogul husband Jay Z have welcomed twins, according to US media reports on the two new members of music’s royal family that already includes five-year-old Blue Ivy.

News that the songstress had given birth, reported by entertainment outlets including People magazine and US Weekly, ignited social media, with the so-called “Bey hive” fan group buzzing over the yet unrevealed sexes and names of the latest additions to the Carter Clan.

Speculation grew when an unidentified woman was photographed Friday carrying a large bouquet of pink, blue and purple flowers-complete with a card that appeared to read “B + J”-along with twin pink and blue balloons in the shape of feet that read “Baby Girl” and “Baby Boy.”

A representative for Beyonce did not immediately respond to AFP’s request for comment.

Superstar Beyonce in February made the blockbuster reveal that she was expecting.

Clad in panties and a bra under a flowing veil, she commanded control of the internet by posting a picture of herself kneeling beside a human-size floral arrangement, her hands cradling her rounded belly.

“We would like to share our love and happiness.
We have been blessed two times over,” the 35-year-old singer wrote.

“We are incredibly grateful that our family will be growing by two, and we thank you for all your well wishes,” she added, signing with Jay Z.

Speculation that Beyonce’s due date had approached was fueled earlier this week when husband Jay Z, 47, was absent at the Songwriters Hall of Fame.

The rapper, who grew up as Sean Carter, took to Twitter to thank artists who had influenced him as well as former US president Barack Obama.

Obama hailed the hip-hop mogul-who campaigned actively with Beyonce for the first African-American president-as a kindred spirit at the event in a surprise appearance by video.

“Jay and I are also fools for our daughters, although he’s going to have me beat once those twins show up,” the former president and father of two joked.

Some fans clamoring for details on the twins took Obama’s aside as a hint that the babies might be girls.

But despite rumblings and guessing games no concrete details regarding sexes or names of the babies have been revealed.

Beyonce and Jay Z are among the most commercially successful figures in music, with a combined net worth estimated at $1 billion.

As an expectant mother Beyonce made a New Age celebration of women at the Grammy Awards earlier this year-putting on an extravagant, abstract performance while proudly displaying her baby bump cloaked in a flowing gold gown.

She pulled out of her headlining spot at April’s Coachella music festival in southern California, however, on the advice of her doctors.

She still made a number of red carpet appearances while carrying the twins and documented her pregnancy via social media-to the joy of her adoring fans.

Beyonce’s mic-drop pregnancy announcement had triggered intrigue over the fact that it came a little more than nine months after her last album “Lemonade”-in which she strongly hinted that Jay Z was unfaithful.

One lyric warns an unfaithful man of a “final warning” that he’s “gonna lose your wife” if his behavior doesn’t change.

A sullen Jay Z appears at the end of the film to embrace her, suggesting reconciliation.

And on the couple’s ninth wedding anniversary in April, Beyonce released an updated video for her romantic ballad “Die With You.”

It features home video-esque footage of tender moments between the couple as well as clips from Blue Ivy’s birth and toddler years, ending with a scene of the new big sister of the family kissing her mother’s pregnant belly.