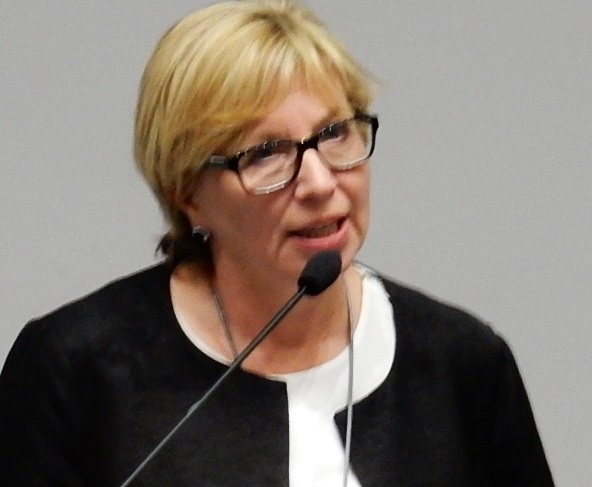 Rosemary Anne "Rosie" Batty (born 9 February 1962) is an Australian domestic violence campaigner and the 2015 Australian of the Year. Her role as a campaigner began in 2014 after her 11 year old son Luke Batty was murdered by his father Greg Anderson. As a campaigner, she has spoken publicly about her experiences as a survivor of domestic violence in order to raise public awareness and advocate for changes in police responses, the delivery of support services and government engagement. Batty is considered to have had a significant influence on national public attitudes, donations and allocations of funding, government initiatives, and police and legal procedures related to domestic violence in Australia.

Background
Batty was born in England and settled in Australia in 1988 following an initial visit in 1986.

Domestic violence and the murder of Luke
Batty met Greg Anderson in 1992 when they worked together at a recruitment company and the two began a romantic relationship which lasted two years. Anderson showed signs of sexual violence whilst they were together, including allegedly attempting to rape a friend of Batty's. Batty has relayed:

"In many instances I would wake up in the middle of the night and find him having sex with me, having let himself into my room and bed. I would be too shocked to say or do anything, and he would gratify himself and leave. For reasons I still don't really understand today, I never considered it rape. I think I was just so confused by him and this ill-defined relationship we had. He didn't ostensibly (sic) force me to have sex with him, but it was all so furtive and abnormal. Talking to my friend that night, something in me snapped and I thought, you bastard! I was furious with him - and with myself. It made me realise the emotional and physical abuse to which he had been subjecting me, and I resolved to cut him out of my life. Later that evening, Greg tried to come into my bedroom. I told him to fuck off and make plans to leave my house immediately."

Anderson left on the following weekend and they ended the two year relationship. Almost 8 years later she initiated contact with him and resumed a brief sexual relationship which led to Batty's pregnancy.

Batty has said that Anderson's abuse began shortly after they met and increased when she fell pregnant. Batty has expressed that Anderson was a loving father to Luke and she defended his right to have contact with their son.

Anderson has been described by those who knew him as unstable, manipulative and aggressive. He struggled to maintain a job and a place to live. In reporting on the 2014 coronial inquest into Luke's death, Melissa Davey from The Guardian wrote of Anderson:

Inquest witnesses told of an arrogant and erratic man with a strong disrespect for authority. ... The question of Anderson’s mental illness has come up frequently, because although he prayed out loud, grew increasingly religious, had hallucinations and was aggressive, he also showed behaviour that was cold, intelligent and controlled, the inquest heard. While coroner Ian Gray heard that Anderson suffered from delusions and probably an undiagnosed mental illness, police officers also described him as "intelligent" and "calculating". Because Anderson distrusted doctors, or anyone he saw as having authority, he never sought help for his anger or received an official diagnosis of mental illness.

In November 2012, Anderson was caught accessing child pornography at a public computer in a Melbourne Library. In January 2014, Anderson threatened to kill one of his flatmates, leading to the flatmate seeking an intervention order and Anderson being arrested but released shortly after. Because of privacy laws, Batty was not immediately made aware of these events.

In April 2013, Anderson wielded a knife at Luke when they were alone inside his car, reportedly telling him that "it could all end with this." Batty decided that she could no longer support Anderson having contact with Luke, and after reporting the incident to police the court ordered that Anderson could have no further contact with his son, and an intervention order which named both Batty and Luke as protected persons was granted. In July 2013, Anderson challenged the decision in a court hearing, where Batty was told for the first time about Anderson's child pornography investigation. Despite this, Anderson was granted access to Luke in public when he was playing sport.

Murder of Luke
Luke Batty was described as "nice and fun". He played cricket and was a Scouts member.

On 12 February 2014, Anderson murdered eleven year old Luke at cricket practice on a sports oval in the outer Melbourne suburb of Tyabb. Although parents and children were present, as people began to leave and were some distance away Anderson managed to isolate Luke inside a cricket net where he struck his son on the head and stabbed him to death. Anderson resisted arrest and threatened ambulance workers with his knife. He later died in hospital from police gunshots and self-inflicted stab wounds.

In the coronial inquest, police officers, child protection services and Batty stated that they never believed that Anderson would harm Luke, as although he had a history of violence against Batty, he was not violent toward his son.

Campaign against domestic violence
The morning after Luke's murder, Batty emerged from her home to speak to the media. She told the media:

I want to tell everybody that family violence happens to everybody, no matter how nice your house is, how intelligent you are. It happens to anyone and everyone.

Batty began speaking publicly about her experience. She became an advocate for domestic violence survivors and victims, and sought to address perceived systemic failures in responses to domestic violence in Australia. She has spoken about a lack of communication between services, about public perceptions of domestic violence, about a lack of funding, and about police and legal procedures that she felt disempowered her ability to protect herself and her son.

In 2014, Batty established the Luke Batty Foundation to assist women and children affected by domestic violence.

In April 2014, she responded to a comment from journalist Joe Hildebrand on Ten Network's Studio 10, a TV panel show. In discussing proposed Victorian laws for compulsory reporting of child abuse cases, Hildebrand said that being "scared for your own safety, I’m sorry, it is not an excuse". In response, Batty said that she was shocked at the notion, and had thought that after her son's death, she had hoped that "something would come out of this that would actually show the difficulty women have in abusive relationships".

Rosie Batty was appointed 2015 Australian of the Year.

In September 2015 she called on Prime Minister Malcolm Turnbull to close Australian immigration detention facilities due to the incidence of rape and sexual assault. Malcolm Turnbull has said of domestic violence in Australia that it "requires a great advocate and Rosie has been able to do that in a way that I think nobody has done before."

Batty's story was instrumental in the establishment in 2015 of the Royal Commission into Family Violence in her home state of Victoria. It was tabled in Parliament on Wednesday, 30 March 2016. The report is a culmination of a 13-month inquiry into how to effectively prevent family violence, improve early intervention, support victims, make perpetrators accountable, better coordinate community and government response and evaluate and measure strategies, frameworks, policies, programs and services. The report is made up of eight volumes and is founded on 227 recommendations made by the Commission to improve, guide and oversee a long-term reform program that deals with family violence. This includes the establishment of the Family Violence Protection Act which provides a detailed definition of family violence, the relationships in which it can arise and a reinforcement of the sound objectives and principles of the Act.