Bangladesh consul general in NY conferred with ‘Declaration of Honor’ 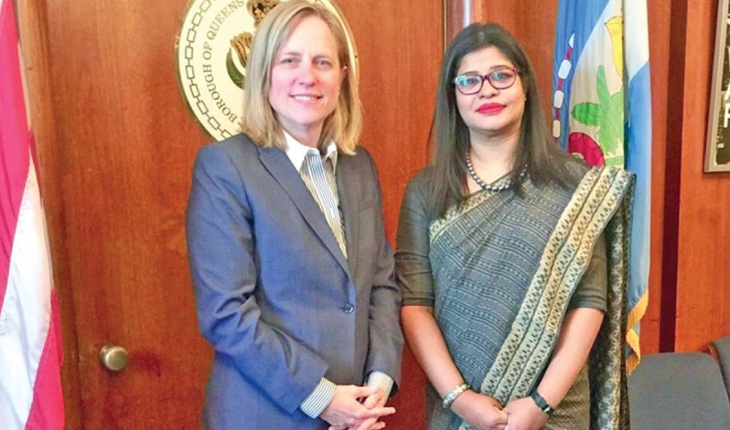 Queens Borough President Melinda Katz has conferred ‘Declaration of Honor’ to Sadia Faizunnesa, consul general of Bangladesh in New York for her contribution to the welfare of the community.

The ‘Declaration of Honor’ dated 26 March 2019 was conferred to Faizunnesa on the eve of the celebration of Independence and National Day of Bangladesh.

This is the first time that any Bangladesh Consul General has been awarded this type of prestigious honor from the Queens Borough President, said a press release.

This was awarded in recognition of the work of Sadia Faizunnesa for public friendly Consular service and outreaching the Bangladesh-American community who lives in Queens Borough.

Mentionable, Queens Borough is called ‘The World’s Borough’, as it hosts more than 150 ethnicities and 2.4 million residents of differents nationalities.

Consulate General of Bangladesh has been trying robustly to reach out to the Bangladesh-American community as well as to the mainstream people, offices and institutions to project correct history, reach culture and remarkable development of Bangladesh.

Also, the 99th Birth Anniversary of the Father of the Nation Bangabandhu Sheikh Mujibur Rahman and National Children Day was celebrated in a bigger and befitting manner at the central Queens Library.

Consulate General is now working for establishment of a ‘Bangla Corner’ at the Queens Library.

Two books both in Bangla and English version “The Unfinished Memoirs” and “Prison Diary” of the Father of the Nation Bangabandhu Sheikh Mujibur Rahman had already been presented by the Consul General to the Queens Library.

Consulate General is also working with the Queens Borough for including ‘Welcome’ sign in Bangla language at the JFK and La Guardia Airports.

Queens Borough President has applauded all of these works of Bangladesh Consul General and conferred this special award to Consul General Sadia Faizunnesa.