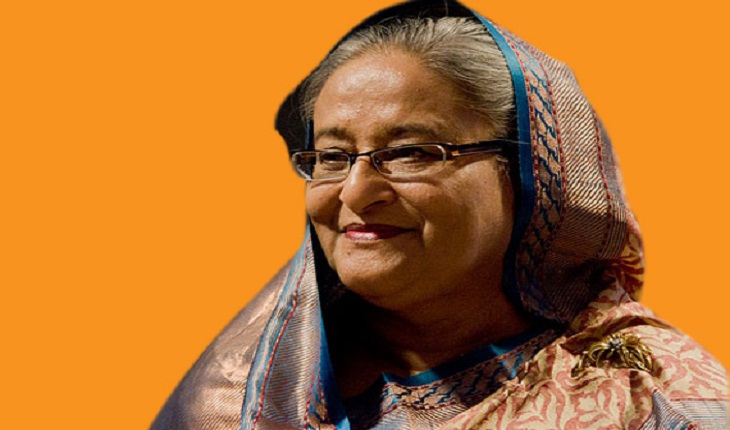 The prime minister is now in New York to join the 73rd Session of the UN General Assembly (UNGA).

Central Awami League leaders and ministers who are visiting the USA as the prime minister’s entourage members greeted Bangabandhu’s daughter by presenting bouquets at her hotel suite at Grand Hayatt Hotel New York.

PM’s younger sister Sheikh Rehana was present on the occasion.

The senior officials of the Prime Minister’s Office also greeted the premier by presenting a bouquet.

Later, officials of the Ministry of Foreign Affairs led by the foreign minister greeted the prime minister by presenting a bouquet and a birthday cake.

Members of the Special Security Force (SSF) which provide physical security to the President and the Prime Minister and other VIPs, also greeted the premier by presenting a bouquet and a birthday cake separately.

The AL leaders, ministers, the Foreign Ministry officials and the SSF members also congratulated the prime minister as she has been conferred with the prestigious “International Achievement Award” and the “2018 Special Distinction Award for Outstanding Leadership” for her humanitarian and responsible policy in hosting the Rohingyas.

Inter Press Service (IPS), a global news agency, conferred the prime minister with the “International Achievement Award”, while the Global Hope Coalition, a network of three not-for-profit foundations based in New York, Zurich and Hong Kong, honoured with the “2018 Special Distinction Award for Outstanding Leadership” at two separate functions here on Thursday evening.

The prime minister arrived here on Sept 23 on a weeklong official visit to the United States to attend the 73rd UNGA. She will leave here for home on Saturday evening local time and reach Dhaka in the morning on October 1 via London.

Find out persons behind publication of Sinha’s book: PM

PM Sheikh Hasina disposes of 16 files from US