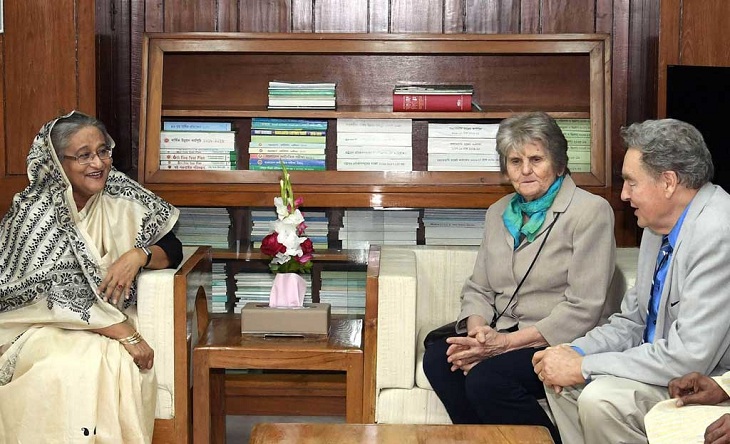 Prime Minister Sheikh Hasina on Monday said Myanmar is not working as per its commitment with Bangladesh on the repatriation of Rohingyas to their homeland in Rakhine.

The Prime Minister said this when US couple Paul Connett and Ellen Connett who received Bangladesh’s “Friends of Liberation War Honour” met her at her Jatiya Sangsad Bhaban office.

Sheikh Hasina said the Myanmar government had pledged to take back its nationals from Bangladesh and agreements had also been signed with them following discussions over the issue.

But the Nay Pyi Taw authorities are not acting as per the agreement, she said, adding that Rohingyas have already outnumbered the local people of Cox’s Bazar.

About the relocation of Rohingyas, the Prime Minister said some 25,000 Rohingya families will be shifted to an island being developed where they will get better living conditions.

Referring to the experiences of the people of Bangladesh about the refugee life, Sheikh Hasina said 10 million people took shelter in neighbouring India during the War of Liberation in 1971.

Besides, she along with her younger sister Sheikh Rehana had to live in exile as refugee after the brutal assassination of Father of the Nation Bangabandhu Sheikh Mujibur Rahman in 1975, the Prime Minister said.

During the meeting, Paul Connett and Ellen Connett apprised the Prime Minister of their visit to a number of places in Bangladesh, including Rohingya camps in Cox’s Bazar.

They highly praised the government for what they said “excellent arrangements” of various facilities, including clean drinking water and sanitation system, for Rohingyas at the camps, saying they were really impressed.

The couple said they are planning to hold a concert in the USA and its proceeds will be donated to the UNHCR for the Rohingya people.

Paul Connett recalled that he had entered Bangladesh first in October, 1971 with freedom fighters and had been impressed to see green Bangladesh.

The Prime Minister expressed her profound appreciation for their valour and sincere love and solidarity with the people of Bangladesh.