No one can stop Bangladesh’s development journey: Prime Minister 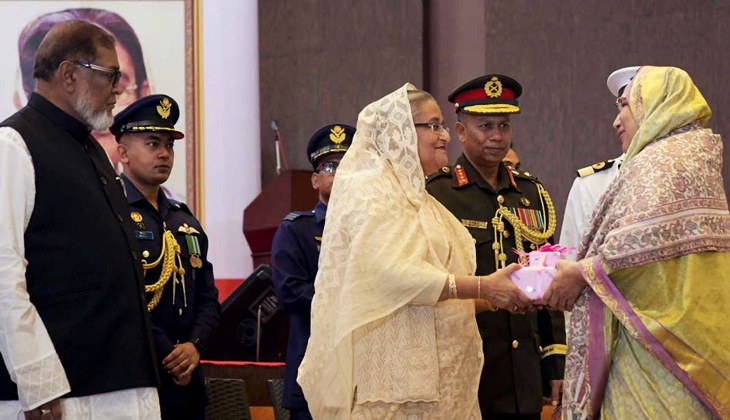 Prime Minister Sheikh Hasina on Wednesday said no one can stop the development journey of Bangladesh anymore as her government started it braving many obstacles.

“As we’ve started the development journey overcoming many obstacles, Inshallah no one can stop this journey anymore,” she said while addressing the reception accorded to the gallantry award winner freedom fighters and their heirs.

The Prime Minister accorded the reception to 101 freedom fighters and their successors at Army Multipurpose Complex of Dhaka Cantonment on the occasion of the Armed Forces Day 2018.

Sheikh Hasina said Bangladesh is marching towards development and her government’s goal is the continuation of this development trend. “Inshallah, we'll be able to do so (to continue the trend).”

About the Charter of Change announced by Awami League in its 2008 electoral manifesto, she said, “You now consider how much change we could've brought. But, I claim that we’ve surely been able to change the days (the fate of the common people).”

The Prime Minister said now many countries in the world want to follow Bangladesh to mark development. “The whole world recognises Bangladesh as the role model of development,” she added.

She, however, said Bangladesh still needs to be developed much more.

Hasina said Bangladesh earned dignity in the world during her government  in the last 10 years. At present, no one can neglect Bangladesh as a country of hunger, poverty, dearth, storm and cyclone, she added.

The Prime Minister said the golden jubilee of the country’s independence will be celebrated in 2021 making the country as hunger- poverty-free Sonar (golden) Bangladesh as dreamt by Father of the Nation. “None can suppress Bangladesh anymore,” she added.

Sheikh Hasina regretted that the history of the Liberation War was distorted after the killing of Father of the Nation Bangabandhu Sheikh Mujibur Rahman, but the reality is that it is not possible to hide the truth of the history.

The Prime Minister said every freedom fighter gets Tk 5000 as Victory Day Allowance and Tk 2000 as New Year Allowance (Baishakhi allowance) from the current fiscal year.

Hasina, who is also in- charge of the Defence Minirsry, handed over Bahini Padak-2017 (Peace Time Awards) among 13 members of the Armed Forces -- 9 Army members, one Navy member and three Air Force members--- for their heroic and courageous contribution.

PM says she considers premiership as scope to serve people