PM says she considers premiership as scope to serve people 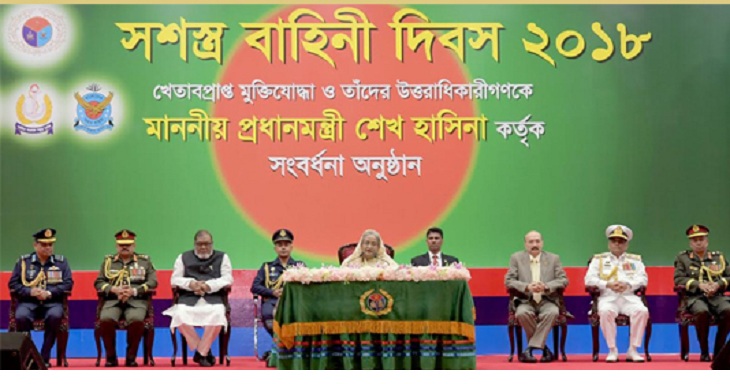 Prime Minister Sheikh Hasina today expressed her firm determination to keep up the pace of development, saying that she considers the premiership as a scope to serve the people.

“Running the state and the post of prime minister are not valuable to me, rather it’s a big opportunity for ensuring welfare of the people and changing their lot,” she told a reception on the occasion of the Armed Forces Day-2018.

The prime minister accorded the reception to the successors of Birshreshthos, and the gallantry award-recipient freedom fighters of the armed forces at the Army Multipurpose Complex at Dhaka Cantonment this morning.

As many as 101 gallantry-award recipient freedom fighters and their heirs including close relatives of seven Birshreshthos joined the function.

The prime minister said Bangladesh is now a role model of development in the world and it has earned the UN recognition of a developing country. “We achieved this honour through liberating the country and many nations of the world now want to follow Bangladesh,” she said.

Sheikh Hasina said Bangladesh is marching towards development and the aim of her government is to keep up the pace of uplift.

“We will be able to achieve the goal, and crossing many hurdles we started our journey towards advancement and none could halt it Insha Allah,” she asserted.

The premier said Bangladesh is now an independent country and it (independence) was earned in exchange for blood of millions of martyrs.

“Bangladesh is now an independent country which will never fail … we want to reach fruits of independence in every house and we want the people of the country will no more suffer from poverty and hunger,” she said.

Quoting Bangabandhu’s historic March 7 speech, Sheikh Hasina said: “None will be able to suppress Bangladesh … it’s advancing and will move ahead further.”