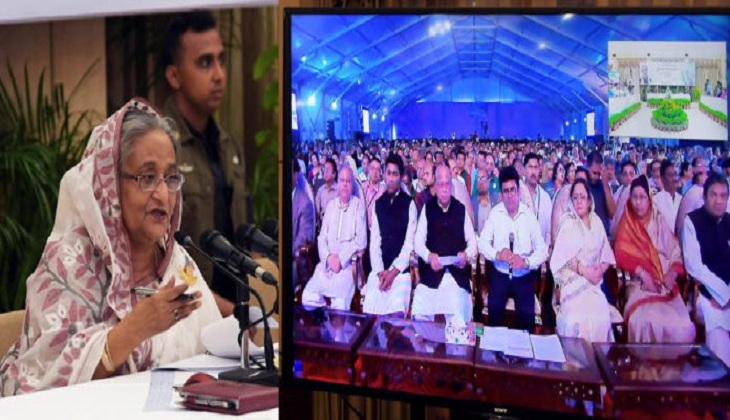 Prime minister Sheikh Hasina on Monday said the second nuclear power plant would be constructed in the southern part of the country.

“The government has already conducted survey in several islands in Barisal and we will choose any of those islands to construct the country’s next nuclear power plant,” the premier said this while inaugurating the Golden Jubilee programme of Barisal Sher-e-Bangla Medical College (BSMC) through video conference from her Ganabhaban residence.

The prime minister said a feasibility study is also going on to supply gas from Bhola to Barisal aimed at flourishing industries in the region.

Health minister Mohammad Nasim spoke on the occasion from BSMC premises while state minister for health and family welfare Zahid Malik was present at the Ganabhaban.

Later, the prime minister exchanged views with government officials, teachers and former students of the college and assured them of taking projects to resolve the residential problems of the teachers, students, nurses and staffs.

Pointing out her government’s plans for development of country’s southern part, the prime minister said the region was neglected for a long time. Barisal, once known as the ‘Shashya Bhandar’ (crop storage) and ‘Venice of Bangla’ has lost its glory due to negligence.

The present government after taking office in 1996 has been conducting massive development work in the southern part of the country particularly for improving the communications system.

‘We want to regain the glory of Barisal through boosting agricultural production, industrialisation and infrastructural development of the region,” she said.

The Padma Bridge along with rail line would play important role in socioeconomic development of Barisal, she said adding that the rail line on Padma Bridge would go up to Paira Port via Barisal. A feasibility study of the project, with the support of the British government, is being conducted, she added.

Sheikh Hasina said bridges are being constructed on Paira River, Bishkhali River and Agunmakha River to establish direct road communication from Barisal to Bhola and Barguna.

Sheikh Hasina said the Paira Port will be turned into a deep sea port in future. Construction of a 1300 MW power plant is about to be completed, she said.

Later, the prime minister through a video conference from her Ganabhaban residence inaugurated four multistoried building comprising 345 flats constructed at Doyagonj and Dhalpur for cleaners of the Dhaka South City Corporation (DSCC).

Mayor of DSCC Mohammad Sayeed Khokon, chief executive officer Khan Mohammad Bilal and a number of beneficiaries of the project spoke on the occasion from Doyagonj side.

The government in 2013 took up the project for constructing five residential buildings at Doyagonj, five at Dhalpur and two at Sutrapur at a cost of Tk 1,900 million for cleaners of the city corporation.

Under the project four buildings were inaugurated today, Monday and construction work of eight other buildings is going on.

Addressing the function the prime minister hoped that children of the cleaners will get proper education and prepare themselves in operating modern equipment of cleaning.

She said the government would procure modern vehicles and equipment for conservancy department of the city corporations to conduct daily cleaning operation.

“We want every homeless person to get home. The cleaners provide us services to keep our neighborhood neat and clean. So it’s the duty of the government to give them a clean environment to live in,” she added.