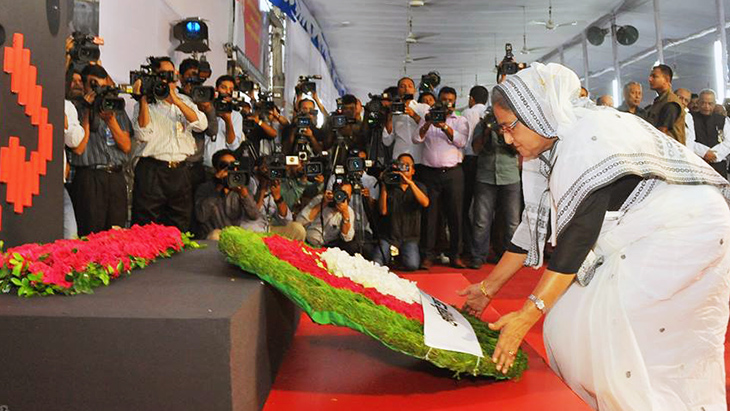 Prime Minister Sheikh Hasina today (Tuesday) paid rich tributes to the victims of August 21 grenade attack in 2004 by placing wreaths and prayed for eternal peace of the departed souls of the martyrs at Awami League's central office on Bangabandhu Avenue in capital.

Today is horrifying August 21. The country, on this day 14 years ago, experienced one of the deadliest, barbaric and bizarre incidents in its history that stunned the whole nation.

Miscreants hurled grenades at a rally of the then opposition Awami League (AL) on Bangabandhu Avenue in the capital on August 21, 2004 leaving at least 24 people dead, including AL’s women affairs secretary Ivy Rahman, and injuring scores others.

The incident took place on Saturday. Sheikh Hasina attended the party rally as the chief guest. After the rally, an anti-violence procession was supposed to be brought out. Miscreants started hurling grenades soon after she (Sheikh Hasina) finished her speech with the slogan ‘Joy Bangla, Joy Bangabandhu’.

AL leaders and activists and common people got stunned when grenades exploded at the political gathering, killing at least 16 party activists on the spot.

Ivy Rahman, wife of late President Zillur Rahman, succumbed to her injuries after fighting for 58 hours at a hospital.

Party leaders and activists started screaming and made human shield to save Sheikh Hasina’s life.

Her private security personnel Mahbubur Rahman sacrificed his life while trying to save Sheikh Hasina.

A total of 52 accused persons, including BNP chairperson Khaleda Zia’s eldest son Tarique Rahman and the then state minister for home Lutfozzaman Babar are now facing trial in connection with the August 21 grenade attack case.

Of the charge sheeted accused, 18 are still believed to be hiding abroad amid government efforts to bring them back.

The government filed two cases — one for the murder and the other under the Explosive Substances Act.