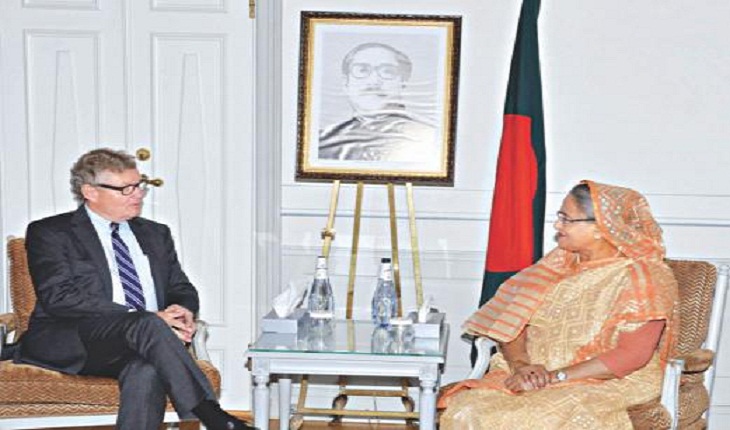 "Together we can bring a change in the lives of millions in both our countries," she said while taking part in the Bangladesh-Sweden Business and Investment Forum at Rosenbad Conference Centre of the Prime Minister's Office in Stockholm.

Hasina also invited the Swedish business leaders to visit Bangladesh to explore the immense opportunities for changing lives of millions in the two friendly states.

After making a three-hour stopover in the British capital, the PM will depart for home and is expected to reach Hazrat Shahjalal International Airport today morning.

In her speech at the forum, Hasina mentioned that Bangladesh has the most liberal investment policy in South Asia where the cost of establishing business is relatively lower. "We enjoy 'duty-free, quota-free' access to the markets of the EU, Australia, Canada, India, Japan and New Zealand."

The PM said the Bangladesh-Sweden relationship was now deeper and stronger than ever before. "And this is the time to unlock the full potential of our relations."

Bangladesh is also developing a number of hi-tech parks, she said.

"Our knowledge industry, ICT and related sectors are also expanding rapidly. Shipbuilding is another fast-growing industry in Bangladesh, by making world-class light to medium sized ocean-going vessels," she said.

Hasina mentioned that PricewaterhouseCoopers (PwC), which offers services in auditing, accounting and consultancy, in its February 2017 report predicated Bangladesh to be "one of the three fastest growing economies globally over the next three decades".

"The strength of Bangladesh economy was globally recognised. We have achieved a growth rate of 7.24 percent this year," she said.

She said Bangladesh was a success story in the ready-made garment sector. "We're now the 2nd largest garment exporter in the world. Like the RMG sector, other sectors are making significant progress as well."

Hasina pointed out that Bangladesh became self-sufficient in food despite its small land area compared to its vast population.

According to Food and Agriculture Organisation (FAO), the PM said, Bangladesh was among the top 10 global producers in horticulture, inland fisheries, rice and potato. Agricultural innovation, led by small and marginal farmers with appropriate government support, was the key to this success.

Swedish Minister for Enterprise and Innovation Mikael Damberg spoke on the occasion.

A memorandum of understanding between Sweden-Bangladesh Business Council, Stockholm, and Nordic Chamber of Commerce and Industries was also signed to strengthen cooperation in the areas of trade and investment.

The MoU was inked in the presence of Hasina and the Swedish minister for enterprise and innovation.

In another development, two leading Swedish companies Investor AB and ABB Sweden have expressed their keen interest to work for the development of Bangladesh's RMG and power sectors.

Dhaka, Stockholm to fight terror together