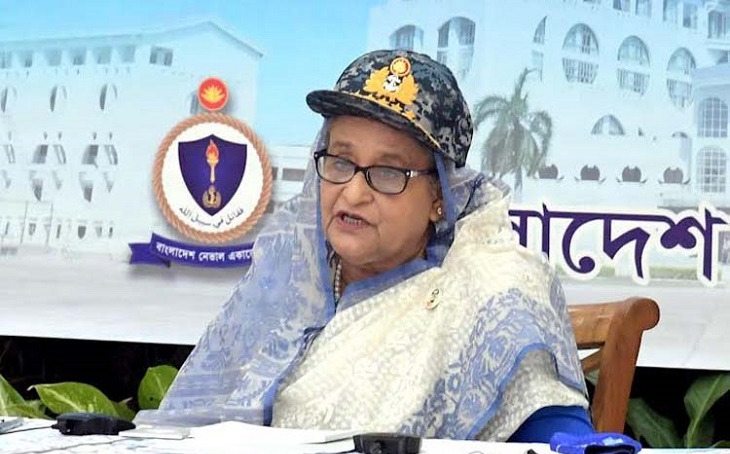 "To further strengthen the capabilities of the Bangladesh Navy, we have plan to adding more advanced ships, modern war equipment and technologies to the force in the future," she said.

The premier was addressing the winter President Parade of the passing out cadets of the "Midshipman 2019 Alfa" and "DEO 2021 Bravo" at Bangladesh Naval Academy, Potenga in Chattogram, joining virtually from her official resident Ganabhaban here.

She said Bangladesh Navy has been turned to truly full-fledged "three- dimensional" force through inducting two submarines "BNS Navajatra" and "BNS Joyjatra" in 2017.

She also mentioned that the navy is now enabled to play a stronger role in ensuring the safety of the country's vast maritime areas enriched with natural resources.

The navy is also contributing a lot to preventing human trafficking and smuggling, ensuring security of fishermen, and the safe passage of merchant ships for expansion of the force's capacities, she said.

The premier said work is underway to build a permanent submarine base "BNS Sheikh Hasina" with modern basin facilities at Pekua in Cox's Bazar to provide safe jetty facilities to submarines and warships at the harbour.

Sheikh Hasina said the construction work of the "Sher-e-Bangla Base" has progressed a lot to enhance the operational and communication facilities of the naval vessels in the coastal areas of the south-western Bangladesh.

"In order to build the navy as a modern and regional strong force, the government is taking and implementing realistic plans such as various infrastructural developments, incorporation of warships to the navy and strengthening operational capacity of existing ships," she added.

On behalf of the prime minister, Chief of Naval Staff Admiral M Shaheen Iqbal distributed prizes among the cadets for their outstanding performance.

Among the commissioned cadets, Midshipman of 2019/a batch Md. Mohtasim Sifat was awarded "Sword of Honour" as best all-round Midshipman for obtaining highest standard in all fields.

Bangladesh Navy also organised a spectacular parade, marking the ceremony which the prime minister witnessed virtually from the Ganabhaban.

Chief of Naval Staff Admiral M Shaheen Iqbal delivered vote of thanks at the programme.

situation they have participated in the training activities at Bangladesh Naval Academy where they have shown their indomitable interest, strong morale and courageous mentality in facing future challenges.

She hoped that in any crisis of work or personal life, they will show such prudent and leadership qualities.

She said at the end of the training, today 44 new commissioned officers are going to serve the Bangladesh Navy.

She expressed her hope that, "You will work tirelessly for the protection of the sovereignty and security of the motherland being imbued with the spirit of the Liberation War."

The premier urged the new officers to keep the mantra of honesty, proper leadership and self-sacrifice in their mind, saying the hard training that they have completed is just the beginning of their life.

She said, "You have to be ready to work shoulder to shoulder with the members of the Army and Air Force in any necessity of the country."

Sheikh Hasina also expressed her hope that the new officers' patriotism, discipline and conscientiousness will inspire their subordinates to dedicate themselves to the needs of the country in the same way.

The prime minister also highlighted the initiatives taken by her government for the development of armed forces including Bangladesh Navy.

She said Awami League, after a long 21 years, came to power in 1996 through people's verdict and took various steps to modernize the navy.

At that time, she added, they worked on various infrastructural development, procurement of warships and strengthen the operational capacity of existing ships.

Since the formation of the government in 2009 after winning election in 2008, she said, they have started the implementation of the "Forces Goal-2030" in light of the Defence Policy formulated by Father of the Nation Bangabandhu Sheikh Mujibur Rahman.

Sheikh Hasina said they have already inducted a significant number of modern warships, helicopters, maritime patrol aircraft (MPA) and submarines to the Bangladesh Navy with the state-of-the-art combat equipment and technology.

Mentioning that one new MPA from Germany has been commissioned to the Aviation Wing of Bangladesh Navy last November, she said another one will be inducted next May.

In this perspective, she said construction of a second hangar with all modern facilities for operation and maintenance of helicopters and MPA is also underway.

The prime minister went on saying a decision has been taken to build a modern warship at Chattogram Drydock Limited run by the Navy, adding it would transform the Navy as a "Builder Navy" from a "Buyer Navy".

Sheikh Hasina also said alongside the incorporation of new ships and war equipment, her government is also working to increase and streamline the organizational structure of the Bangladesh Navy to ensure the best use of these sophisticated technologies.

In this connection, she said Naval Administrative Authority of Dhaka has recently been renamed as "Commander Dhaka Naval Region" along with elevating its chief's rank to Rear Admiral from Commodore.

Along with the development of the armed forces, she said her government is working relentlessly for the socioeconomic uplift of the country.

The premier said the Father of the Nation had a dream to establish a modern academy to develop a competent leadership for the military through advanced training among the country's young generation.

And that is why "Bangabandhu Complex" with modern facilities has been inaugurated in 2018, she said.

Through this complex, she noted the training facilities at the Naval Academy have elevated to international level.

Alongside the training in classrooms and laboratories, the academy has already undertaken initiative to install small arms firing, motor driving and bridge simulators, the premier added.

She expressed her firm belief that the naval officers trained in the academy will take advantage of this increased opportunity to lead the navy forward with more confidence.

Today, Bangladesh Navy has gained the status of a highly organized, efficient and professional force not only in the country but also in the international arena, she said.

She added their self-sacrifice and dedication in everywhere, including the UN peacekeeping mission, has brought honour and dignity for Bangladesh, which has also brightened the country's image abroad.

Extending her gratitude, the head of the government said the armed forces, including the Bangladesh Navy, have stood by the people with utmost sincerity during the Corona pandemic.

Sheikh Hasina said Bangabandhu, from Bangladesh's geopolitical and socio-economic point of view, had realized the importance of protecting the sovereignty of the country's naval areas and maritime resources.

That's why he demanded the relocation of the naval headquarters to Chattogram in his historic "Six-Point Demand", she said.

The premier added Bangabandhu's apprehension was that there was no alternative of a strong navy to protect the sovereignty of the vast maritime region of Bangladesh to build a strong maritime-based economy.

In this connection, she said that Bangabandhu had set out to build an efficient, strong, modern and technologically advanced navy after independence and procured five modern warships from friendly countries such as Yugoslavia and India.

At the same time, he (Bangabandhu) commissioned three bases including navy's largest training base BNS Ishakhan and three ships, she said, adding, on the same day, Bangabandhu witnessed the first naval exercise at BNS Surma.

The prime minister said the process of procuring warships from the United Kingdom began with the efforts of the Father of the Nation.

She continued the Father of the Nation enacted the Territorial Waters and Maritime Zones Act in 1974, which was the base of Bangladesh's maritime policy.

In continuation of this, it has already been possible to define the country's maritime boundaries with the neighbouring countries and rights have been established in a vast sea area of 118,813 square kilometres, she remarked.