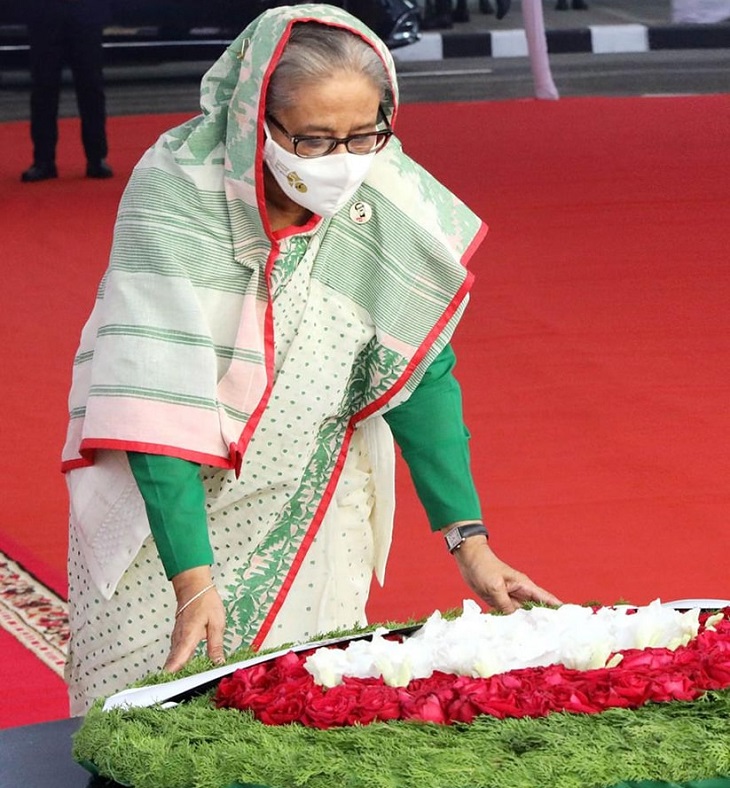 The premier paid homage by placing wreath at the portrait of the Father of the Nation in front of Bangabandhu Memorial Museum in city’s Dhanmondi-32 this morning.

After laying the wreath, she stood in solemn silence for some time as a mark of profound respect to the memory of Bangabandhu, the architect of the independence of Bangladesh.

Flanked by senior leaders of her party, Sheikh Hasina, also the President of ruling Awami League, placed another wreath at the portrait of Bangabandhu as the party chief.

The nation is celebrating 51st Victory Day, the most precious day of the Bangalee people, today as the country was liberated from the Pakistan occupation forces on the day 50 years back after a nine-month-long bloodstained war.

As part of the state programmes, the prime minister will also be present at the parade in the National Parade Square at 10:30pm, when President Md Abdul Hamid will take salutes and inspect the parade as the chief guest.

She will also unveil a logo inscribed with “Mujib’s Bangladesh”, the brand name of Bangladesh Tourism there and release the memorial postal stamp on the occasion of the birth centenary of Father of the Nation and the golden jubilee celebrations of country’s independence.

She will also attend the ceremony of the birth centenary of the Father of the Nation and the golden jubilee of the country’s Independence at the South Plaza of the Jatiya Sangsad.