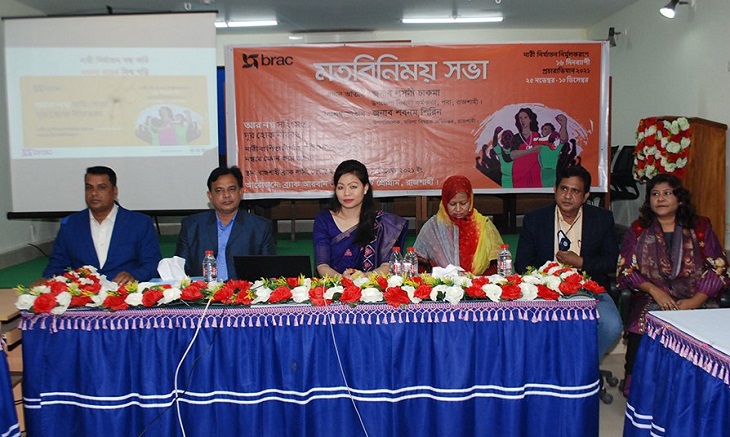 Ensuring women rights has become crucial to establish equity-based society through ending violence and repression against them.

Wide-ranging social awareness among the community people, especially parents and teachers, is very important for prevention of child marriage and dowry for substantial and sustainable reduction of violence against women.

The views were expressed by social watchdogs at a meeting on the importance of freeing the society from all sorts of violence and cruelty against women.

Brac Urban Development Programme (UDP) hosted the meeting at Brac Learning Center under Paba Upazila in the district on Wednesday to mark its 16-day campaign against women violence.

The discussants laid emphasis on concerted efforts of all government and non-government entities concerned for establishing rights of women in the society.

With a changed social mindset, people should be educated for better and smooth access to all spheres of development.

The meeting was told that the present government of Prime Minister Sheikh Hasina has been working relentlessly for women development for the overall uplift of the country.

The government has adopted diversified programmes to enable womenfolk to contribute to take the nation forward spontaneously.

The discussants unanimously termed the present government as women-friendly and mentioned that the government has attached top priority on women development.

Lashmi Chakma put emphasis on both men-women equal participation for achieving the SDGs by 2030 coupled with building a developed and prosperous Bangladesh by 2041.

She called for a concerted effort of all the government and non-government organizations concerned for freeing the women and children from all sorts of violence and repression.

Utmost emphasis should be given on physical and mental development of the children, she added.