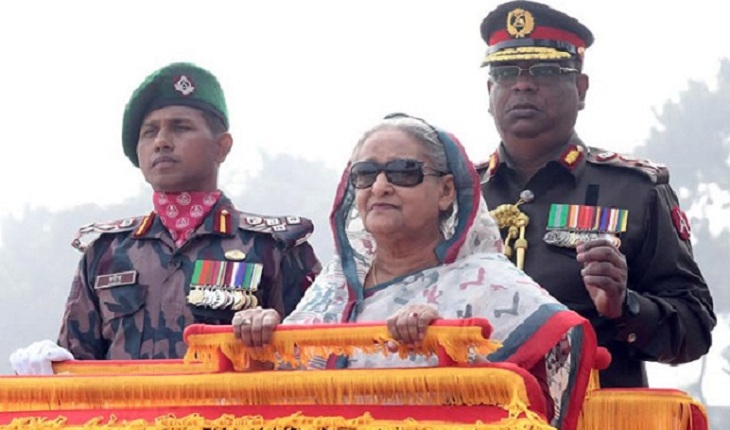 The High Court has praised Prime Minister Sheikh Hasina for taking time-befitting and accurate decisions in dealing with Pilkhana BDR Mutiny in 2009.

Besides, the court in the full verdict of the mutiny case published on Wednesday lauded the role of Bangladesh Army, Bangladesh Air Force and Bangladesh Navy in addressing the deadly incident.

Justice Md Abu Zafor Siddique in his observation said a newly-elected government, led by Prime Minister Sheikh Hasina, took a rational decision with courage and patience to control the mutiny, which was a farsighted one.

Capitalising the long-standing dissatisfaction of BDR, a vested quarter had hatched a plot to destroy a skilled and trained border force through a mutiny aiming to destabilise the country’s socioeconomic condition, the court said in its observation.

The High Court today published the 29,590-page full text verdict of the 2009 BDR mutiny case after the three conducting justices signed on it.

On November 5, 2013, a Dhaka court sentenced 152 soldiers of the then Bangladesh Rifles (BDR) and two civilians to death, and 160 others to life imprisonment for their involvement in the BDR mutiny. And 256 soldiers were sentenced to various jail terms.

Besides, the bench upheld the life term imprisonment of 146 convicts, among 160, and acquitted 12 others. It also sentenced 34 others to life imprisonment who had previously been acquitted by the subordinate court. Two hundred others were sentenced to various jail terms.

On February 25-26 in 2009, a total of 74, including 57 army officials, were killed during the mutiny that took place at BDR Pilkhana headquarters in Dhaka.

Prime Minister urges police to be a people-friendly force