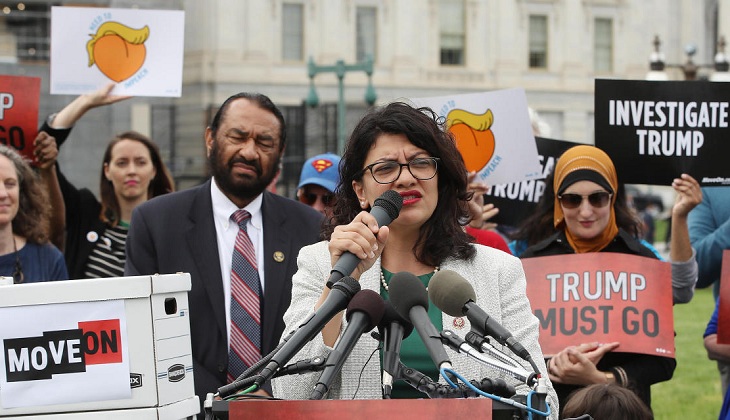 Two House Democrats on Thursday joined activists at the US Capitol who presented Congress with signatures of 10 million people calling on lawmakers to begin impeachment proceedings against president Donald Trump.

"We are holding in our hands 10 million reasons for being here today," progressive congressman Al Green said, as he and first-term congresswoman Rashida Tlaib held up a flash drive.

Dozens of cardboard boxes featuring the signatures, gathered on petitions from groups such as MoveOn and the annual Women's March, were delivered to Tlaib, who has introduced legislation that would direct the House Judiciary Committee to begin proceedings to investigate whether Trump has committed impeachable offenses.

"In the face of this time, this remarkably dark time in our country, this to me is a moment of light," she said.

But some Democrats argue that the document lays out multiple occasions in which the president may have obstructed justice, including Senator Elizabeth Warren, a 2020 presidential candidate who has called for impeachment proceedings.

Other senior Democrats including House Speaker Nancy Pelosi have cautioned against such a move, stressing it could deeply divide the nation of about 325 million people.

They warn it could backfire politically in the run-up to the 2020 election, especially with the Republican-controlled Senate likely to acquit the president in the event of impeachment by the House of Representatives.

But Green framed the action as a constitutional necessity.

"You can't say you have a constitutional crisis and then do nothing."

The remark appeared to be a direct challenge to Pelosi herself, who said Thursday that Trump's refusal to comply with congressional inquiries into his actions has brought the country to the brink.

"Trump and his administration's decision to ignore the oath of office has triggered a constitutional crisis," Pelosi said, although she herself has stopped short of calling for Trump's ouster.