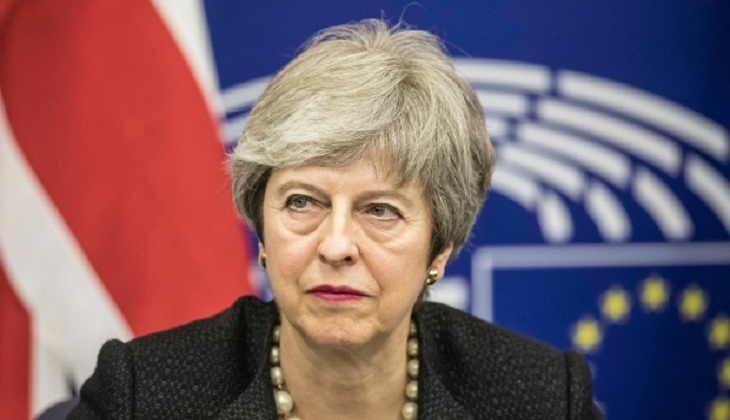 Exactly 1,000 days after Britain voted to leave the European Union, and nine days before it is scheduled to walk out the door, Prime Minister Theresa May hit the pause button Wednesday, asking the bloc to postpone the U.K.'s departure until June 30.

EU leaders, who are exasperated by Britain's Brexit melodrama, will only grant the extension if May can win the U.K. Parliament's approval next week for her twice-rejected Brexit deal. Otherwise, the U.K. is facing a chaotic "no-deal" departure from the bloc within days, or a much longer delay that May says she will not allow while she is in power.

May, who has spent two and a half years trying to lead Britain out of the EU, said it was "a matter of great personal regret" that she had to seek a delay to Brexit.

In a televised statement from 10 Downing St., May said she shared the frustration felt by many Britons who have "had enough" of endless Brexit debates and infighting — though she did not accept a role in causing it. Instead, she blamed Parliament for the deadlock, and warned that if lawmakers did not back her deal it would cause "irreparable damage to public trust."

"It is high time we made a decision," May said.

In a letter to European Council President Donald Tusk, May acknowledged that the Brexit process "clearly will not be completed before 29 March, 2019" — the date fixed in law two years ago for Britain's departure.

May asked to delay Britain's withdrawal until June 30, and said she would set out her reasons to EU leaders at a summit in Brussels on Thursday.

Her longshot plan is to hold a third vote in Parliament on her deal next week, then use the EU-granted extension to pass the legislation needed for an orderly departure from the EU.

"As prime minister I am not prepared to delay Brexit any further than June 30," May told the House of Commons — a hint she could quit if Britain is forced to accept a longer pause.

Tusk said he thought a short delay to Brexit "will be possible, but it would be conditional on a positive vote on the withdrawal agreement in the House of Commons."

May's request — and Tusk's response — leaves Britain and the bloc facing Brexit uncertainty right up to the deadline for departure. Withdrawing without a deal could mean huge disruptions for businesses and U.K. residents, as well as those in the 27 remaining EU countries.

"Even if the hope for a final success may seem frail, even illusory, and although Brexit fatigue is increasingly visible and justified, we cannot give up seeking until the very last moment a positive solution," Tusk said in Brussels.

Tusk made clear what other EU leaders have long hinted: The EU is unwilling to give Britain more time unless the government can find a way out of the Brexit impasse.

German Foreign Minister Heiko Maas said that "if the (EU) Council is to decide on extending the deadline for Britain, then we would like to know: Why, why, why?"

French Foreign Minister Jean-Yves Le Drian said a delay could only be granted if May guaranteed that its purpose "is to finalize the ratification of the deal already negotiated."

EU leaders are united in saying that the divorce deal it spent more than a year and a half negotiating with Britain can't be renegotiated.

But the deal has twice been rejected twice by hefty margins in Britain's Parliament, amid opposition from pro-Brexit and pro-EU lawmakers.

May had planned to try again this week to get the agreement approved, until the speaker of the House of Commons ruled that she can't ask Parliament to vote on the deal again unless it is substantially changed.

May told Tusk that despite the ruling "it remains my intention to bring the deal back to the House." She's likely to do that next week — within days or hours of Britain's scheduled departure — by arguing that circumstances have changed and the speaker's bar on a third vote no longer applied.

But she faces a struggle to overturn the huge margins of defeat for her deal in previous votes in January and last week.

Tusk did not say whether the EU would be willing to grant a long delay to Brexit if Britain changed course and abandoned May's deal for a new approach.

British opposition politicians, and pro-EU members of May's Conservative government, have urged a longer extension, saying a delay of just a few months could leave the country once again facing a no-deal Brexit this summer.

They want to commit to a close post-Brexit economic relationship with the bloc to ease disruption for businesses and citizens.

Opposition Labour Party lawmaker Angela Eagle said May should "stop banging her head against the brick wall of her defeated deal" and seek cross-party support for a new Brexit strategy.

But a shift to "soft Brexit" would infuriate the pro-Brexit wing of May's divided party, and a long delay would require Britain to participate in May 23-26 elections for the European Parliament.

May said postponing Brexit beyond June would result in Parliament spending "endless hours contemplating its navel on Brexit."

Any delay that required Britain to take part in European parliamentary elections would be a major headache for the bloc. Britain's seats already have been allocated to other countries to fill in the May election.

Britain believes it would not have to participate if it got a three-month delay, because the newly elected European parliament is not due to convene until July. Some EU officials take a different view and want any extension to end by May 23, the first day of the European elections.

The Brexit-fueled political chaos has drawn reactions ranging from sympathy to scorn at home and around the world. On its front page Wednesday, the Brexit-backing Daily Mail newspaper bemoaned the time since the referendum as "1,000 lost days."

Juncker said Britain's Parliament needed to decide whether it would approve the only deal that is on the table.

"If that doesn't happen, and if Great Britain does not leave at the end of March, then we are, I am sorry to say, in the hands of God," he said. "And I think even God sometimes reaches a limit to his patience."