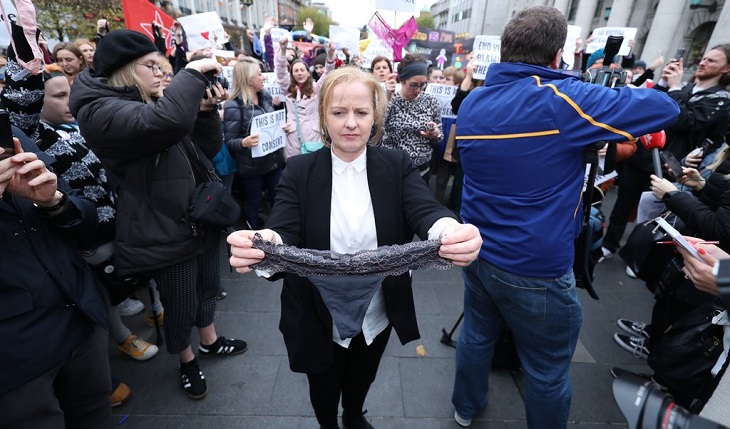 Ruth Coppinger, a deputy in Ireland's Parliament, at a protest against victim blaming in Dublin.

A criminal trial in Ireland, in which the lawyer of a man accused of rape cited the lacy underwear worn by a woman as a sign of her consent, has ignited outrage across the country and beyond.

During the closing argument, the defense lawyer asked the jury to consider the underwear worn by the 17-year-old woman at the time prosecutors said she was raped in a muddy alleyway by a 27-year-old man.

“Does the evidence out-rule the possibility that she was attracted to the defendant and was open to meeting someone and being with someone?” the lawyer asked, according to The Irish Times. “You have to look at the way she was dressed. She was wearing a thong with a lace front.”

The man was acquitted, and the case immediately drew calls for accountability and sparked a national dialogue about consent and victim blaming. Hundreds of women and men with posters and lace underwear in hand protested in five cities across the country on Wednesday.

In Dublin, women hung thongs on clotheslines along sidewalks in the city center. In Cork, protesters laid lingerie across the steps of the courthouse.

“My issue isn’t just the barrister; it’s the system that allows it,” said Mary Crilly, director of the Cork Sexual Violence Center and one of the speakers at the protests.

What a woman wears, Ms. Crilly said, is her business and does not indicate interest or consent. “It’s never her fault,” she said. “We’re allowing the perpetrators to get away.”

On Tuesday, Ruth Coppinger, a member of the Irish Parliament, pulled a thong out of her sleeve during public debate to protest what happened at the trial, further raising the profile of the case.

Ms. Coppinger said she had expected the room to break out in shouts and objections when she pulled out a pair of her underwear, as it often does when she “brings the realities of life into the stuffy and conservative environment of Parliament.”

Instead, there was silence.

The Taoiseach, or Irish prime minister, Leo Varadkar, eventually responded, saying it was “never the victim’s fault,” regardless of the setting or other factors like clothing.

A day later, Ms. Coppinger led protests in Dublin and called for changes to a legal system in which a woman’s clothing can be considered as evidence of consent and where only a small fraction of rape cases are convicted.

“How heroic do you need to be to pursue a rape case in Ireland?” Ms. Coppinger said.

Women also poured out their frustration on social media, where they posted photos of colorful underwear with the hashtag #ThisIsNotConsent.​
Ms. Crilly, who has worked on behalf of rape survivors for 35 years, said that though a cultural change in women’s status in Ireland had been slow, it was happening.

For decades, Ireland was a socially conservative society ruled by the norms of the Roman Catholic Church, and women’s rights often took a back seat. In recent years, socially liberal policies have begun to flourish.

But as women’s status in society changes, the laws have not always kept pace.

Ms. Crilly pointed to the overturning of Ireland’s abortion ban in May as a historic moment for women. In a landslide, voters repealed language in the country’s Constitution that prohibited abortion in almost all situations.

“I didn’t think I would see that in my lifetime,” Ms. Crilly said.

This cultural reckoning has also shone a light on the way the country deals with cases of sexual assault. There have been similar challenges in Northern Ireland. In Northern Ireland, fewer than 2 percent of rape cases lead to convictions, according to a recent report from the Criminal Justice Inspection.

This spring, a proceeding that came to be known as the Belfast trial ignited similar outrage in Northern Ireland, where two rugby players who play for the national team were accused of raping a woman at a house party.

The prosecution’s case included accounts from a taxi driver who testified that the woman had been sobbing on her drive home and that there had been blood on the back of her white jeans. A doctor told the court that he had observed a laceration in her bleeding vagina.

The defendants said the encounter had been consensual, and denied having vaginal sex with the woman. In private WhatsApp messages, they referred to the events of the night as “spit-roasting” and “a merry-go-round.”

The jury acquitted the men, and the fallout reverberated across the island.

“The whole country was horrified by that case day by day,” said Clíona Saidléar, the director of the Rape Crisis Network Ireland. Activists and others rallied on social media, using the hashtag #IBelieveHer, and at least 1,000 gathered publicly to protest the ruling in Belfast and also in Dublin.

Ms. Saidléar said social media had been instrumental to grass-roots organizing for women’s rights, in the Republic of Ireland and Northern Ireland.

“These women know how to organize,” Ms. Saidléar said. “They’re not passive in the face of this insult, of this demonstration of patriarchy in our courts.”