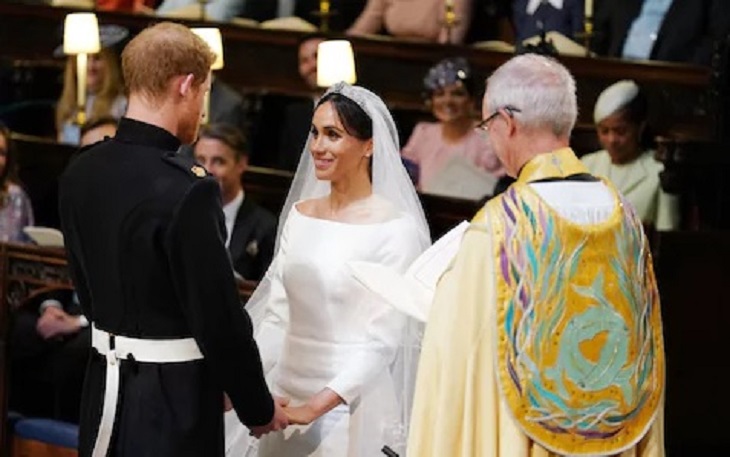 Prince Harry told the Archbishop of Canterbury he would take Meghan Markle to be his wife at a glittering display of royal pageantry that supporters hope will inject a measure of modern Hollywood glamour into the 1,000-year-old monarchy.

“I will,” Harry answered when asked by Justin Welby, the leader of the Anglican Communion, if he would take Markle - dressed in a flowing white gown created by British designer Clare Waight Keller - to be his wife, to love her, comfort her, honour her and protect her.

The declarations are being followed by a reading and the address, delivered by black US bishop Michael Bruce Curry.

The couple then give their vows, exchange rings – a Welsh Gold ring for Markle and a platinum band for Harry – before the archbishop proclaims them husband and wife.

After entering St George's Chapel unescorted, Markle made her way towards the Quire, halfway down the church where Prince Charles walked her to his son, Harry.

Tens of thousands of fans lined the route Markle took towards the castle, waving British flags and cheering as the Rolls-Royce limousine drove past with the bride and her mother.

Air traffic controllers for the nearby Heathrow Airport, one of the world's busiest, said the air space over Windsor was being closed for 15 minutes before the ceremony.

Hours before, Elizabeth bestowed the title of Duke of Sussex on her grandson, a step that means the American actress, star of the TV drama "Suits", will become a duchess when she marries Harry.

"It’s absolutely incredible. The atmosphere here is just going to be crazy when Meghan turns up. I’m so pleased to be here," said Charlotte Field, 21, one of 1,200 people invited into the grounds of the castle for the wedding.

A host of guests were present. US media mogul Oprah Winfrey and actor George Clooney and his wife Amal were joined by former soccer star David Beckham, his fashion designer wife Victoria and James Corden, the British host of the American TV chat show "The Late Late Show".

"This is a moment when we can all celebrate the rebirth of the royal family," said Kenny McKinlay, 60, who had come down from Scotland for the wedding. "It's a time when all the nation can come together rather than being divided. It's a day when you can be proud to be British."

The couple, who met on a blind date in 2016 and fell in love in a tent under the stars in Botswana, are tying the knot at the 15th-century St George's Chapel, in a castle that has been home to 39 English monarchs since 1066.

More than 100,000 fans are expected to cram the narrow roads of Windsor, about 20 miles (30 km) west of London. Visitors had to pass through police search points set up around the castle.

Hundreds of TV crews from around the world were present for the union of Harry, 33, sixth-in-line to the British throne, and Markle, 36, a divorcee whose mother is African-American and father is white.

To some Britons, the wedding embodies a more modern Britain where race or background are no bar to even the most elite and traditional of institutions.

To others, it is an irrelevance or mild distraction from the schism of Brexit, which has deeply divided the United Kingdom; polls suggest that most Britons will not bother tuning in.

Markle's own father Thomas Markle, 73, a former lighting director for TV soaps and sitcoms, pulled out of the ceremony this week, telling the US celebrity website TMZ he had had heart surgery on Wednesday.

Confusion over his attendance marred the build-up to the wedding, which had been choreographed for months by royal aides, and his name still appears in the order of service.

The service will be conducted by the Dean of Windsor with Justin Welby, Archbishop of Canterbury and spiritual head of the Anglican Church, overseeing the exchange of vows.

A black US Episcopalian bishop, Michael Bruce Curry, will give the wedding address, while Lady Jane Fellowes, Diana's sister, will deliver the reading.

It's all about the well-plumed hats for royal wedding guests