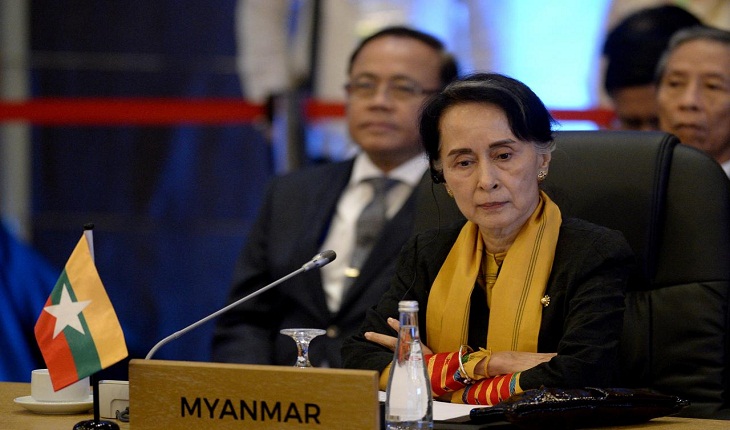 Human rights monitors on Wednesday urged Myanmar to withdraw a ban on protests in its largest city, Yangon, amid fears that free speech is under pressure under the government led by democracy champion Aung San Suu Kyi.

Suu Kyi led efforts to end decades of military rule and won a landmark election in the Buddhist-majority country in 2015, but her civilian government shares power with the military and has no control over the army and police.

She has also been roundly criticised in the West for failing to rein in the military over its alleged role in atrocities against minority Rohingya Muslims which the United Nations has described as textbook ethnic cleansing.

The ban on protests, issued this month by a military-controlled ministry, restricts all applications for processions or assemblies in central Yangon in order to avoid ‘public annoyance and anxiety’ and ‘disturbance of traffic’, according to official documents reviewed by Reuters.

The curb came weeks before Pope Francis’ visit to Yangon, when he is expected to raise the Rohingya, hundreds of thousands of whom have fled the country after a Myanmar army offensive in August.

It underscores rising concerns over free speech after recent arrests of journalists and activists in Myanmar.

‘There is no legitimate reason for imposing a ban on all protests in major sections of Burma’s largest city,’ said Brad Adams, Asia director at Human Rights Watch, referring to Myanmar by its old name.

‘This directive was issued by a military officer and should be seen by the civilian government as a direct challenge to its commitment to basic rights for Burmese citizens. The government needs to reverse this ban and uphold the rule of law and refuse to capitulate to arbitrary actions by the military.’

The order, issued by Yangon Region Security and Border Affairs Minister Colonel Aung Soe Moe, instructs authorities in 11 townships to deny all applications for assemblies. It does not say how long the curb will last.

A senior official from the military-run General Administration Department in Yangon’s Ahlone Township confirmed that his office has received the order. He declined to be named as he’s not authorized to speak to the media.

A Myanmar court last week jailed for two months two journalists along with their interpreter and driver for violating an aircraft law by filming with a drone.

Police on Sunday arrested an ultra-nationalist Buddhist monk who has a history of stoking sentiment against the Rohingya.

Since Suu Kyi’s government took power last year, 93 people including journalists and activists have been charged or arrested under a controversial law that some worry is used to curb criticism of the authorities, according to advocacy group Research Team for Telecommunications Law.