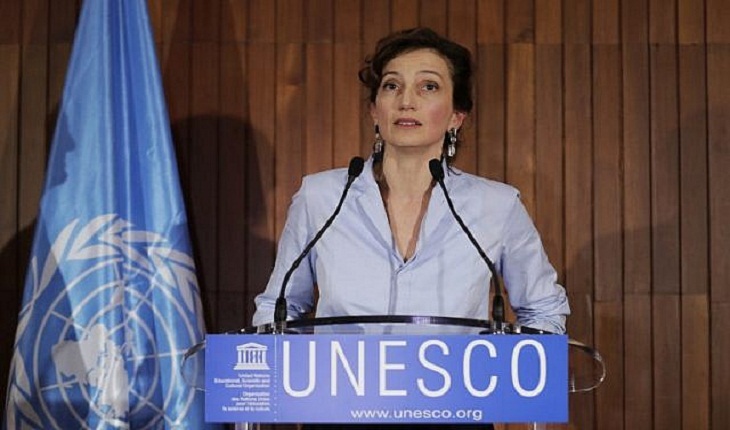 UNESCO's executive board voted Friday to make a former French government minister the U.N. cultural agency's next chief after an unusually heated election that was overshadowed by Middle East tensions.

The board's selection of Audrey Azoulay over a Qatari candidate came the day after the United States announced that it intends to pull out of UNESCO because of its alleged anti-Israel bias.

The news rocked a weeklong election already marked by geopolitical resentments, concerns about the Paris-based agency's dwindling funding and questions about its future purpose.

If confirmed by UNESCO's general assembly next month, Azoulay will succeed outgoing Director-General Irina Bokova of Bulgaria, whose eight-year term was marred by financial woes and criticism over Palestine's inclusion in 2011 as a member state.

Azoulay narrowly beat Qatar's Hamad bin Abdulaziz al-Kawari in the final 30-28 vote after she won a runoff with a third finalist from Egypt earlier Friday. The outcome was a blow for Arab states that have long wanted to lead the U.N. Educational, Scientific and Cultural Organization.

UNESCO has had European, Asian, African and American chiefs, but never one from an Arab country.

In brief remarks after she won the election, Azoulay, 45, said the response to UNESCO's problems should be to reform the agency, not to walk away from it.

"In this moment of crisis, I believe we must invest in UNESCO more than ever, look to support and reinforce it, and to reform it. And not leave it," she said.

The new director will set priorities for the organization best known for its World Heritage program to protect cultural sites and traditions. The agency also works to improve education for girls, promote an understanding of the Holocaust's horrors, defend media freedom and coordinate science on climate change.

The next leader also will have to contend with the withdrawal of both the U.S. and Israel, which applauded its ally for defending it and said Thursday that it also would be leaving UNESCO.

The election itself had become highly politicized even before the U.S. announced its planned departure.

Azoulay started the week with much less support than Qatar's al-Kawari but built up backing as other candidates dropped out. She went on to win a runoff with a third finalist, Moushira Khattab of Egypt. Egypt's foreign ministry has demanded an inquiry into alleged "violations" during the voting.

Jewish groups opposed al-Kawari, citing a preface he wrote to a 2013 Arabic book called "Jerusalem in the Eyes of the Poets" that they claimed was anti-Semitic. He wrote, "We pray to God to liberate (Jerusalem) from captivity and we pray to God to give Muslims the honor of liberating it."

In March, the Simon Wiesenthal Centre wrote an open letter to German Ambassador Michael Worbs, chair of the UNESCO Executive Board, to criticize the organization for accepting the former Qatari culture minister's candidacy.

During the months leading up to the election, Egypt and three other Arab nations were engaged in a boycott of Qatar over allegations that the government funds extremists and has overly warm ties to Iran.

French media reported that Qatar recently invited several members of the UNESCO executive board on an all-expenses-paid trip to the country's capital, Doha.

Azoulay's late entry into the leadership race in March also annoyed many UNESCO member states that argued that France shouldn't field a candidate since it hosts the agency. Arab intellectuals urged French President Emmanuel Macron to withdraw his support for her.

She will be UNESCO's second female chief and its second French chief after Rene Maheu, UNESCO's director general from 1961-74. While she is Jewish, her father is Moroccan and was an influential adviser to Moroccan kings, so she also has a connection to the Arab world.

The Trump administration had been preparing for a likely withdrawal from UNESCO for months, but the timing of the State Department's announcement that it would leave at the end of 2018 was unexpected. Along with hostility to Israel, the U.S. cited "the need for fundamental reform in the organization."

The U.S. stopped funding UNESCO after it voted to include Palestine as a member state in 2011, but the State Department has maintained a UNESCO office and sought to weigh in on policy behind the scenes. UNESCO says the U.S. now owes about $550 million in back payments.

Azoulay acknowledged the image of the organization — founded after World War II to foster peace, but marred by infighting between Arab member states and Israel and its allies — needed rebuilding.

"The first thing I will do will be to focus on restoring its credibility," she said.

While UNESCO's general assembly must sign off month on the executive board's leadership pick, but officials said the confirmation vote typically is a formality.