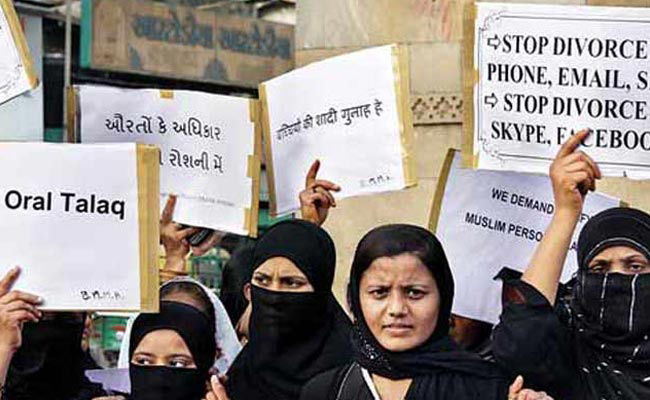 In a 3-2 majority verdict, the Supreme Court said legislation must follow.

India is one of a handful of countries where a Muslim man can divorce his wife in minutes by saying the word talaq (divorce) three times.

The cases were filed by five Muslim women who had been divorced this way and two rights groups.

Three of the judges called the controversial practice "unIslamic, arbitrary and unconstitutional". The court has also asked parliament to legislate on the issue.

"Muslim women in India have suffered for the last 70 years.

It's a historic day for us, but it doesn't end here. I cannot tell you how much Indian women have supported us, despite their religions," Zakia Soman, a women's rights activist, from Bharatiya Muslim Mahila Andolan, one of the organisations who contested the practice, told reporters.

Even though it has been practised for decades, the unilateral instant "triple talaq" divorce has no mention in Sharia or the Koran.

Islamic scholars say the Koran clearly spells out how to issue a divorce - it has to be spread over three months which allows a couple time for reflection and reconciliation.

Activists say most Islamic countries, including Pakistan and Bangladesh, have banned triple talaq, but the custom was thriving in India.

In recent years, many cases emerged of Muslim men in India divorcing their wives by issuing the so-called triple talaq by letter, telephone, and increasingly by text message, WhatsApp, and Skype. A number of these cases made their way to the courts as women contested the custom.

India does not have a uniform set of laws on marriage and divorce that applies to every citizen.