China warns of NKorea conflict ‘at any moment’ 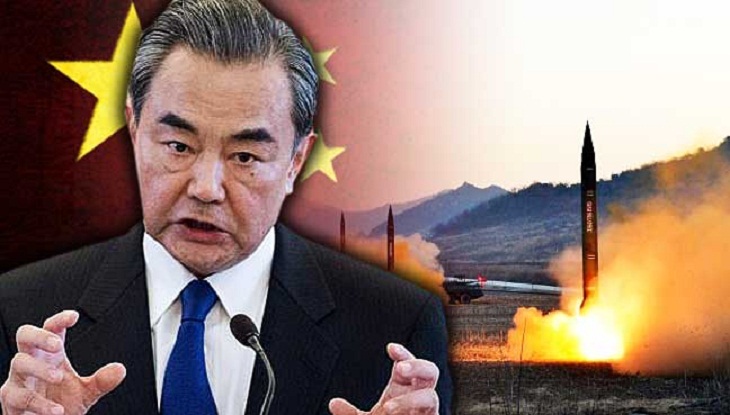 A conflict over North Korea could break out “at any moment”, China said Friday, warning there would be no winner in any war as tensions soar with the United States.

The sharp language came after US President Donald Trump said the North Korea problem “will be taken care of”, as speculation mounts the reclusive state could be preparing another nuclear or missile test.

Trump has sent an aircraft carrier-led strike group to the Korean peninsula to press his point, one of a series of measures that indicate his willingness to shake up foreign policy strategy.

“Lately, tensions have risen... and one has the feeling that a conflict could break out at any moment,” Chinese foreign minister Wang Yi said.

“If a war occurs, the result is a situation in which everybody loses and there can be no winner.”

Whichever side provoked a conflict “must assume the historic responsibility and pay the corresponding price,” he said in a joint press conference with his visiting French counterpart Jean-Marc Ayrault.

Wang’s comments mirrored a warning from the North Korean foreign ministry’s Institute for Disarmament and Peace which said “thermo-nuclear war may break out any moment”.

“The US introduces into the Korean peninsula, the world’s biggest hotspot, huge nuclear strategic assets... pushing the situation there to the brink of a war,” it said according to the North’s official news agency KCNA.

Trump also flexed his military muscle last week by ordering cruise missile strikes on a Syrian airbase the US believed was the origin of a chemical weapons attack on civilians in a northern Syria town.

And the US military on Thursday dropped the biggest non-nuclear bomb it possesses on Afghanistan, targeting a complex used by the Islamic State group, in another move seen as a warning is not afraid to use force.

Trump has repeatedly said he will prevent Pyongyang from its goal of developing a nuclear-tipped ballistic missile capable of reaching the mainland United States.

“We are sending an armada. Very powerful,” Trump said Wednesday of the strike group headed by the USS Carl Vinson supercarrier.

A White House foreign policy advisor said Friday that the US is assessing military options in response to the North’s weapons programs, saying another provocative test was a question of “when” rather than “if.”

Pyongyang has responded with defiance, saying it is ready to fight “any mode of war” chosen by the US and even threatening a nuclear strike against American targets.

There are reports of activity at a nuclear test site in North Korea ahead of Saturday’s 105th anniversary of the birth of the country’s founder Kim Il-Sung, which have fuelled speculation it could carry out a sixth test.

The North’s sabre-rattling has encouraged a rapprochement between Trump and his Chinese counterpart Xi Jinping, who met face-to-face for the first time late last week at Trump’s Mar-a-Lago resort.

Though his election campaign was marked with acerbic denouncements of China’s “rape” of the US economy, Trump dropped his anti-China bombast in Florida, afterwards hailing an “outstanding” relationship with Xi.

But he insists China must handle the Pyongyang problem or suffer the consequences—alarming Beijing, the country’s sole major ally and economic lifeline.

Beijing has long opposed dramatic action against the North, fearing the regime’s collapse would send a flood of refugees across its borders and leave the US military on its doorstep.

“Dialogue is the only possible solution,” Wang said.

But it has lately adopted a tougher line against its neighbour, including suspending coal imports from the country for the remainder of the year.

An editorial in the Global Times, thought to have close ties to hawkish elements of the ruling Communist Party, wrote Thursday that if the North gradually abandoned its weapons programme, “China would play an active role in safeguarding the security of the denuclearised DPRK and its regime”.

“This is Pyongyang’s best choice,” it said.

In the midst of mounting tensions, there has been little sign of strain on the streets of Pyongyang in recent days, where the focus is on preparations for Saturday’s anniversary.

Before the international press and tens of thousands of his adoring citizens, he cut a wide red ribbon to rhythmic cheers, before waving and returning to his Mercedes limousine.

California mosque led by women opens doors to all

Iran condemns US strike on Syria air base as

US informed Russia ahead of Syria strike: official