Canada fire 'out of control' 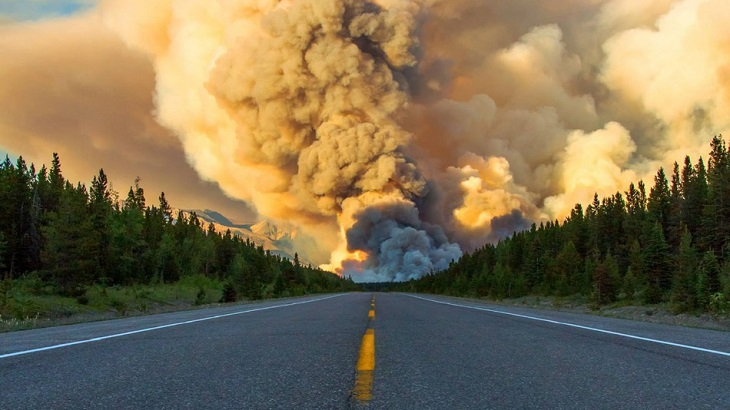 A ferocious wildfire wreaking havoc in Canada was expected to double in size Saturday, officials warned, cautioning that the situation in the parched Alberta oil sands region was "unpredictable and dangerous."

"This remains a big, out of control, dangerous fire," Public Safety Minister Ralph Goodale said of the raging inferno the size of London that forced the evacuation of the city of Fort McMurray.

Winds were pushing the flames east of the epicenter around the oil city late Saturday, as nearly all 25,000 people who were still trapped to the north finally left town, either via airlift or convoys on the roads.

Some 1,570 square kilometers (600 square miles) had been devastated since the blaze began almost a week ago and the fire had grown by an additional 50 percent in less than 24 hours,Goodale told a televised news conference.

"There is one prediction -- that if it continues to grow at the present pace, it could double today," he warned.

"It looks like the weather in and around Fort McMurray will still be, sadly, very conducive to serious burning conditions."

Alberta's government crisis cell cautioned that fire conditions remained extreme in the province due to low humidity, high temperatures nearing 30 degrees Celsius (86 Fahrenheit) and gusty winds of 40 kilometers (25 miles) in forests and brush dried out from two months of drought.

Still, in a glimmer of positive news, the authorities have recorded no fatalities directly linked to the blaze so far.

However, "we need heavy rain," he added. "Showers are not enough."

The only "good news," he said, was that the wind was pushing the fires away from Fort McMurray and oil production sites to the northeast, presenting less threat to people although causing serious damage to the environment.

The government has declared a state of emergency in Alberta, a province the size of France that is home to one of the world's most prodigious oil industries.

Making their way through thick, black smoke, the cars were filled with people trapped to the north of the city, having sought refuge there earlier in the week.

Police wearing face masks formed convoys of 25 cars, with kilometers (miles) of vehicles,smoke swirling around them, patiently awaiting their turn.

With elevated risk that something could go wrong, the convoys along Highway 63 were reduced in size compared to the previous day.

Those being evacuated -- for a second time, after first abandoning their homes -- had fled to an area north of the city where oil companies have lodging camps for workers.

But officials concluded they were no longer safe there because of shifting winds that raised the risk of them becoming trapped, and needed to move south to other evacuee staging grounds and eventually to Edmonton, 400 kilometers to the south.

Some 2,400 vehicles have so far been able to make it to safety.

Officials said they expected all those remaining to be evacuated by the end of the day.

But concerns are growing about the effect on the oil industry, the region's economic mainstay, as the fires come dangerously close to extraction sites.

Syncrude, one of several oil companies in the region, announced that it had shut down its facility 50 kilometers north of Fort McMurray due to smoke, followed by Suncor, after the local authorities ordered them to evacuate personnel.

"Obviously this is affecting energy operations in the region," Alberta Premier Rachel Notley said. "We are still taking this very seriously."

Analysts said Suncor, Syncrude and Shell have slashed output by a total of a million

barrels a day, amounting to around a quarter of the country's entire production, a loss of tens of millions of dollars a day.

More than 1,100 firefighters are battling 45 separate blazes across the province -- six of them totally out of control, including three in and around Fort McMurray.

Inside the smoke-filled city, police were going door to door to evacuate residents left behind nearly a week into the disaster.

Police said they found a family of five late Friday and another person unable to evacuate the city of 100,000 that has been turned into a ghost town.