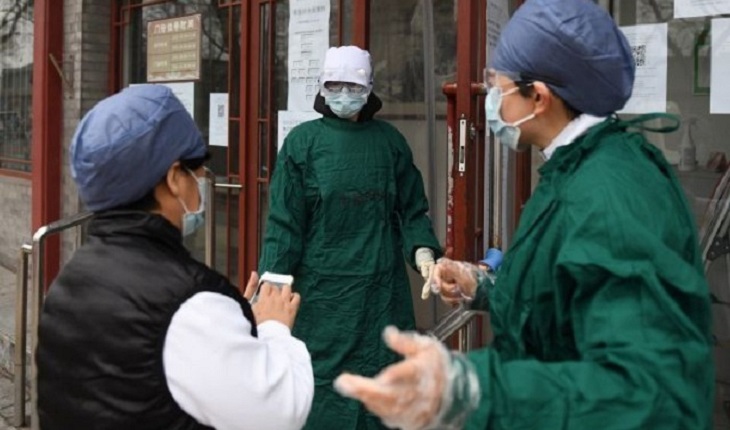 The World Health Organization on Friday raised its global risk assessment of the new coronavirus to its highest level after the epidemic spread to sub-Saharan Africa and caused financial markets to plunge, reports AFP.

WHO chief Tedros Adhanom Ghebreyesus said the risk was being raised to "very high" because of the continued increase in cases and the number of new countries affected in recent days.

These developments "are clearly of concern", Tedros told reporters in Geneva.

But he added: "We still have a chance of containing this virus, if robust action is taken to detect cases early, isolate and care for patients and trace contacts."

The virus has proliferated around the globe over the past week, emerging on every continent except Antarctica, prompting many governments and businesses to try to stop people travelling or gathering in crowded places.

Switzerland became the latest country to announce drastic measures on Friday, saying all events with more than 1,000 participants would be suspended until March 15.

The ban forced the cancellation of the Geneva International Motor Show -- a major item on the global auto industry calendar -- that was due to start next week.

Carnival celebrations, rock concerts and a major watchmaking trade show also had to be scrapped.

The virus has killed more than 2,800 people and infected over 83,000 worldwide -- the vast majority in China -- since it emerged apparently from an animal market in a central Chinese city in late December.
The number of deaths and new infections has been tapering off in China, following unprecedented quarantine efforts locking down tens of millions of people in the worst-hit cities.

But infections elsewhere have started to surge, with Iran, Italy and South Korea becoming the major new hotspots and cases being confirmed in around 50 countries.

"We see a number of countries struggling with containment," said Michael Ryan, head of WHO's health emergencies programme.

The WHO has voiced particular concern about Africa's preparedness, warning that the continent's health care systems were ill-equipped to respond to a COVID-19 epidemic.

Cases had previously been reported in Egypt and Algeria, but not in the sub-Saharan region until Friday when Nigeria reported its first case: an Italian man in densely populated Lagos.

Stock markets around the world have plummeted this week as it has become increasingly clear the virus will take a huge toll on the global economy.

"Stock markets are well on their way to their worst week since the global financial crisis," said Craig Erlam, senior market analyst at Oanda trading group.

Several companies have said they expect the virus to hit their earnings because of weaker demand.

Oil prices also dived four percent to their lowest levels for more than a year, with Brent oil for April delivery sinking as low as $50.05 a barrel.

Analysts have warned that China, the world's second largest economy, will see a major cut in growth this quarter as the country remains largely paralysed by quarantines and containment measures.

Still, signs in China offered hope that the outbreak could be contained.

China reported 44 more deaths on Friday, raising its toll to 2,788, with 327 new cases -- the lowest daily figure for new infections in more than a month.

The main concern for health officials is outside of China, with governments this week forced into increasingly drastic measures in an attempt to battle spiralling epidemics.

The biggest death toll outside China is in Iran, where 34 people have died.

As elsewhere, the virus has mostly killed the elderly or people who had other health conditions.

South Korea also now has the most cases outside China, with more than 2,000 infections and 13 deaths.

The virus has had wide-ranging impact, even forcing K-pop megastars BTS to cancel four Seoul concerts due in April.

In Japan, the health ministry said a British man who was on board a coronavirus-stricken cruise ship quarantined near Tokyo had died, bringing the death toll to six.

The unidentified man's death is the latest linked to infections on the Diamond Princess cruise ship, where more than 700 other people tested positive for the illness.

The death comes as the governor of Japan's rural northern island of Hokkaido urged people to stay at home this weekend in a desperate effort to contain the outbreak.

In Europe, the largest epicentre is Italy with 650 cases and 17 deaths -- mostly in cities in the north.

Wide-ranging measures to halt the spread of the virus have affected tens of millions of people in northern Italy, with schools closed and cultural and sporting events cancelled.

Experts said the virus had probably "circulated unnoticed for several weeks" before the first confirmed cases -- possibly since January.