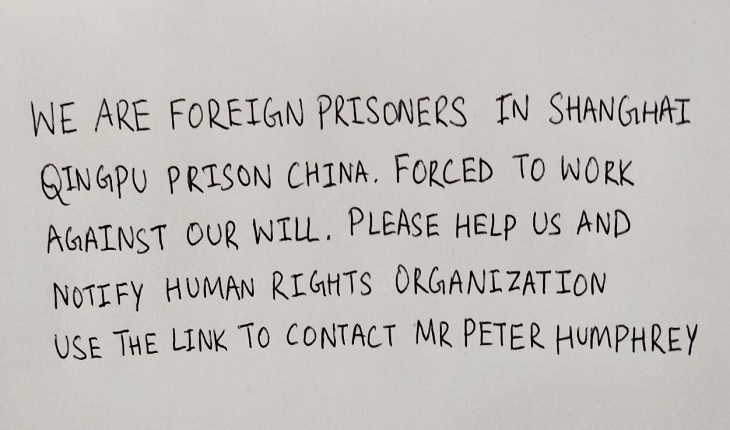 A British retailer with thousands of stores around the world said on Sunday that it has suspended work with a Chinese factory as it investigates allegations of forced labor behind its Christmas cards - spurred by a plea for help that a 6-year-old girl reportedly found scrawled in her family's purchase.

Supermarket chain Tesco said it has also stopped selling the cards after the Sunday Times described an all-caps note, attributed to foreign prisoners in a Shanghai facility, that urges its reader to contact a human rights group. The report, which Tesco's supplier and the Chinese government have strongly disputed, follows years of other notes allegedly penned by abused workers that have raised concerns among unsuspecting shoppers and prompted inquiries.

Tesco said in a statement that it was stunned by the accusations of forced labor and would cut ties with the cards' supplier if it was found to have violated Tesco's rules against prison labor. The company said it has a "comprehensive auditing system," adding that the cards' supplier "was independently audited as recently as last month" and that no evidence of wrongdoing surfaced.

The supplier that Tesco says it is investigating, Zhejiang Yunguang Printing, has denied any use of forced labor. The company told the Global Times in China that it was not aware of the allegations until foreign media outlets reached out.

"We have never been involved in such activities that the media reported," a representative who declined to give a name told CNN on Monday, adding that the company is "investigating whether those cards were printed by us" and saying it thinks "someone is smearing us."

A spokesman for China's Foreign Ministry, Geng Shuang, said at a Monday news conference that officials have verified that no foreign inmates in Shanghai's Qingpu prison are made to work against their will. The spokesman denounced what he called a "drama choreographed" by the author of the Sunday Times report.

The supplier did not immediately respond to The Washington Post's inquiries, nor did the Chinese Embassy.

The upheaval started with a holiday purchase that supports Tesco's charity, the London family said in an interview posted by the BBC. Florence Widdicombe was looking through the cards her mother picked up - she wanted to write to her friends at school - when she starting laughing, her father said.

"Mom, look - somebody's already written in this card," Ben Widdicombe recounted his daughter saying to his wife.
A closer look revealed a note claiming to be from foreign inmates in China's Qingpu prison "forced to work against our will," he said. The note reportedly asked the reader to contact a "Mr. Peter Humphrey" - a British former journalist and private investigator who spent about two years in the prison and who would bring the allegations of mistreatment into the public eye this weekend with a Sunday Times article.

At first, Ben Widdicombe said, he suspected a prank.

"But on reflection, we realized it was actually potentially quite a serious thing," he said.

He messaged Humphrey on LinkedIn on Monday, the journalist would recount later.

The Post could not independently confirm the Widdicombes' account, but the report raises serious questions about the festive cards that Tesco says allow it to donate hundreds of thousands of dollars each year to charitable causes in Britain.

Humphrey said he thinks the note was written by ex-cellmates whom he met after his corporate fraud investigations drew the ire of the Chinese government, landing him and his wife in prison on "bogus charges that were never heard in court." He told The Post he reached out to two former inmates who confirmed to him - before being told of the letter- that people in his old unit have been forced to package Tesco Christmas cards. A third ex-prisoner has said the same since his article published, Humphrey added Monday.

Foreigners in Qingpu have worked on Tesco cards and gift tags for at least two years, Humphrey says he was told. He thinks he knows who wrote the Widdicombes' note, based on the handwriting, but does not want to bring punishments on the man by identifying him.

China's denials of forced labor are unsurprising given the government's response to other alleged human rights abuses, Humphrey said, calling accusations that he fabricated his story "absolute nonsense."

Tesco said Monday that it began an on-site factory investigation Friday and communicated its decision to suspend business there to factory management this past weekend. The British chain said it also spoke with the card supplier and has more meetings scheduled with it and the factory this week.

Notes alleging worker abuse in China have shocked consumers before. In 2013, the New York Times reported, a former prisoner whose story led to a documentary claimed responsibility for a letter found by an Oregon mother in Halloween decorations from Kmart. The Beijing man said he'd stuffed 20 letters into items bound for the West over his years in a labor camp.

"Sir: If you occasionally buy this product, please kindly resend this letter to the World Human Right Organization," the Halloween decorations note is said to have read. "Thousands people here who are under the persecution of the Chinese Communist Party Government will thank and remember you forever."

The next year, a woman in Northern Ireland found an alarming note in a pair of pants that was attributed to prisoners, the BBC wrote.

"We work 15 hours per day and the food we eat wouldn't even be given to dogs or pigs," the note claimed, according to news reports.

A more recent story, from 2017, involved another Christmas card: A woman in Britain told Reuters that she found a scrawled note inside a card from the supermarket Sainsbury's that was signed in Mandarin, "Third Product Shop, Guangzhou Prison, Number 6 District."

Humphrey told the BBC that conditions in Qingpu were poor while he was imprisoned but that work was optional, a way to earn money for soap or toothpaste or biscuits. That seems to have changed, he said.

Censorship would likely prevent current inmates from communicating their plight directly to him, Humphrey said.

"So they resorted," he wrote, "to the Qingpu equivalent of a message in a bottle."