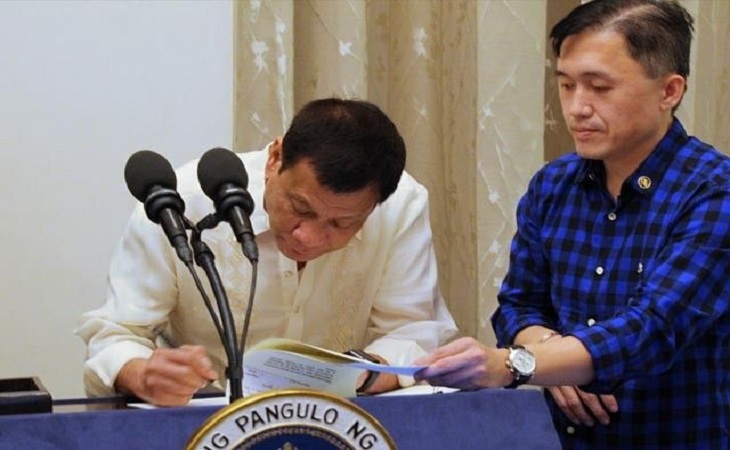 The Philippine president has signed a bill into law penalizing a range of acts of sexual harassment including catcalling, wolf-whistling and persistent telling of sexual jokes, which pro-women's groups have accused him of committing.

Philippine officials released on Monday a copy of Republic Act 11313, known as the "Safe Spaces Act," which Duterte signed in April. The reason for the delay in its public release was not immediately clear.

The bill's main author, opposition Sen. Risa Hontiveros, has called the law a "massive victory" against a growing culture of rude sexist actions.

"This is a big victory and a major push back against the growing 'rude culture' in our streets and communities," Hontiveros said. "With this law, we will reclaim our streets from sexual harassers and gender bigots and make public spaces safe for all."

Other offenses include stalking, exposing "private parts, groping or any advances, whether verbal or physical, that is unwanted and has threatened one's sense of personal space and physical safety."

Restaurants, bars, cinemas and other places of recreation are required to install clearly visible warning signs against would-be violators, including a hotline number to allow rapid reporting of offenses, and to designate an officer to receive complaints or apprehend perpetrators.

"It is the policy of the state to value the dignity of every human person and guarantee full respect for human rights," the law says.

Punishments include fines and imprisonment depending on the gravity of the offense. Foreign violators would be deported after serving a jail term and paying fines.

Duterte, 74, a longtime mayor before winning the presidency in 2016, has been known for speeches laden with expletives and sexual jokes. Activists have repeatedly accused him of sexism and misogyny but supporters have defended him by saying he has introduced regulations to protect and uphold women's rights.

Last year, Duterte publicly ordered troops to shoot female communist guerrillas in the vagina to render them "useless." A left-wing human rights group, Karapatan, reacted by saying Duterte had distinguished himself "as a frothing-in-the-mouth fascist who incites the worst violations of international humanitarian law."

Duterte was also criticized for kissing a married woman on the lips in front of a large Filipino audience in South Korea last year. When Duterte asked if she could explain to her husband that the action would be just a joke, she said yes, and the president leaned in and kissed her as the audience erupted in cheers.

"President Duterte acted like a feudal king who thinks that being the president is an entitlement to do anything that he pleases," Hontiveros said then.

Sexual Harassment had become a norm with women: Priyanka