The US' one-million acre secret

Despite being surrounded by urban sprawl, little has changed here since the first settlers came. 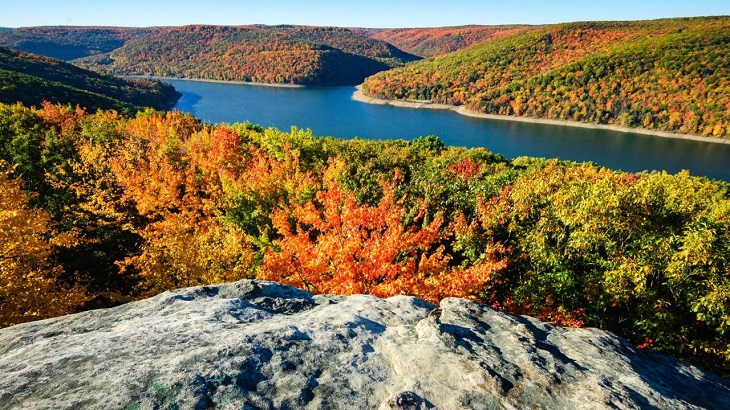 The Allegheny Forest region, spread across northwestern Pennsylvania and southwestern New York, is one of the most bypassed sections of the eastern United States.

In a part of the country that is often dominated by urban sprawl, Allegheny’s nearly one million acres of land has no major cities, battlefields or popular historic sites, so the natural environment remains similar to the way the first settlers would have experienced it. In fact, no other place in the US northeast offers such a vast network of forests, rivers, rock formations and trails. This, combined with a significant industrial history, makes Allegheny an ideal proposal for the first national park between the Atlantic Ocean and the Great Lakes. (Credit: Zack Frank)

A hiker’s paradise
The region is made up of steep hills and valleys – but uniquely this does not result from glaciation. The dynamic terrain, found only here, is the work of the hundreds of waterways that carved their way through these forested mountains.

Allegheny is a haven for hikers and backwoods enthusiasts who revel in the hundreds of miles of intersecting paths and myriad types of terrain, including towering rock cliffs and impressive sections of old growth forest. While there are many trails to explore, the most prominent is the North Country National Scenic Trail, of which 95 miles passes through Allegheny. The trail begins in New York and stretches approximately 4,600 miles through seven states before terminating in North Dakota. (Credit: Zack Frank)

A forest on fire
The Allegheny National Forest, located entirely within Pennsylvania, contains roughly half of the region’s one million acres of forest. During autumn, the trees light up in bright reds, oranges and yellows, rivalling any fall foliage in the country. It’s a sharp contrast to better-known places like New England, where the changing leaves are almost always seen alongside farms and paved roads.

Despite having some protection by the US Forest Service, this area is allowed to be logged, drilled and mined. In addition, fracking has become a new issue as the neighbouring rust-belt towns look to revitalise their economy through resource extraction. (Credit: Zack Frank)

The lake with a dark past
Kinzua Lake was created in 1965 with the construction of the Kinzua Dam on the Allegheny River. Today, visitors swim or boat in the reservoir, knowing little of its difficult history. Most of the submerged lands were tribally owned by the Seneca Nation, and hundreds of families were forced to relocate when the valley was flooded.

During droughts, the concrete foundations of the former Native American residences can still be seen on the muddy floor of the lake. Despite the controversy, it’s hard to deny the beauty of this place. (Credit: Zack Frank)

Home of a hero
One of the most scenic drives in the eastern United States is Route 62, which hugs the Allegheny River for more than 60 miles between the Pennsylvania towns of Warren and Franklin. The drive has exceptional views of cliffs, rapids, river valleys and a number of charming towns.

The route passes through the town of Tionesta, where local hero Howard Zahniser conceived of what would become the Wilderness Act of 1964, setting aside millions of acres of land across the US as roadless areas that can never be altered from their natural state. Ironically, although the Allegheny region gave birth to the idea of wilderness preservation, almost none of the Allegheny Region is currently protected as wilderness. (Credit: Zack Frank)

Place for a picnic
Allegany State Park in New York creates the northern boundary of the Allegheny region, and is more tourist oriented, with a lodge, cabins, paddle boat rentals, bike trails, playgrounds and picnic areas situated around Red House Lake, the central feature of the park. (Credit: Zack Frank)

Uniquely formed rocks
To get off the beaten path in Allegany State Park, find is Thunder Rocks, which consists of gigantic, climbable boulders. Unlike most well-known rock cities in the northeast, which were caused by glacial movement, these rocks were uniquely created by sediment from the creation of the Catskill Mountains. Thunder Rocks were initially buried in dirt and mud, but over time have become exposed through erosion. (Credit: Zack Frank)

A natural refrigerator
One of the least explored areas of Allegany State Park is Bridal Falls, a 39ft cascade waterfall along a creek that acts as a natural refrigerator. On hot days the shaded creek bed is several degrees cooler than in the surrounding hills. A short, unmarked trail leads those in the know to this secluded site. It doesn’t appear on any maps, so ask rangers or locals how to find it. (Credit: Zack Frank)

A two-faced waterfall
The Allegheny Forest region has a variety of waterfalls, most of which are hidden deep in the Allegheny National Forest. Hector Falls near Ludlow, Pennsylvania, is among the strangest in the country, with water descending on two sides. A rectangular rock face extends out from the surrounding rock wall, splitting the falling water before flowing away into a small creek. (Credit: Zack Frank)

The start of the oil boom
Drake Well might just be the most important historical site in the country – or even the world – that no one is aware of. In the late 1850s, former railroad conductor Edwin Drake invested his entire savings in a prototype oil well along Oil Creek in Titusville, Pennsylvania, which became the world’s first well to be drilled with the intent of pulling oil from the ground. This successful project kicked off the world’s first oil boom, and helped create the oil industry that continues to the present day. (Credit: Zack Frank)

Life in the Allegheny
Driving around the Allegheny region, each break in the thick forest reveals charming rural towns. Occasionally, between the mountains ranges, the land opens into flat valleys where families have been farming and raising animals for generations. (Credit: Zack Frank)

Some of the tallest trees in the east
The southern boundary of Allegheny is Cook Forest State Park, which protects the largest tract of virgin woodlands and some of the tallest trees in the east. Despite the outward beauty, the forest has been scarred by tree clearing and a network of oil derricks. It’s these resource extraction policies that are threatening the park’s future as the largest natural expanse of forest remaining in the Mid-Atlantic region, something that can only be combatted by full protection as a national park. (Credit: Zack Frank)

Story of Shoaghi: first Bangladeshi woman to travel to 135 countries

How to go to Sajek Valley

Tropical bay from 'The Beach' to close until 2021

Make your vacations memorable with these 5 tips

From April, tourists can stay at Taj Mahal only for 3 hours