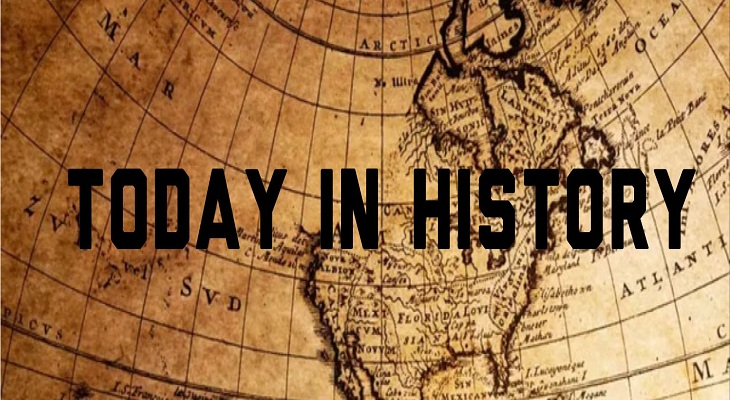 1309 – Pope Clement V imposes excommunication and interdiction on Venice, and a general prohibition of all commercial intercourse with Venice, which had seized on Ferrara, a papal fiefdom.
1329 – Pope John XXII issues his In Agro Dominico condemning some writings of Meister Eckhart as heretical.
1513 – Spanish explorer Juan Ponce de León reaches the northern end of The Bahamas on his first voyage to Florida.
1625 – Charles I becomes King of England, Scotland and Ireland as well as claiming the title King of France.
1782 – Charles Watson-Wentworth, 2nd Marquess of Rockingham becomes Prime Minister of the United Kingdom.
1794 – The United States Government establishes a permanent navy and authorizes the building of six frigates.
1794 – Denmark and Sweden form a neutrality compact.
1809 – Peninsular War: A combined Franco-Polish force defeats the Spanish in the Battle of Ciudad Real.
1814 – War of 1812: In central Alabama, U.S. forces under General Andrew Jackson defeat the Creek at the Battle of Horseshoe Bend.
1836 – Texas Revolution: On the orders of General Antonio López de Santa Anna, the Mexican army massacres 342 Texas POWs at Goliad, Texas.
1866 – President Andrew Johnson vetoes the Civil Rights Act of 1866. His veto is overridden by Congress and the bill passes into law on April 9.
1871 – The first international rugby football match, when Scotland defeats England in Edinburgh at Raeburn Place.
1884 – A mob in Cincinnati, Ohio, attacks members of a jury which had returned a verdict of manslaughter in what was seen as a clear case of murder; over the next few days the mob would riot and eventually destroy the courthouse.
1886 – Geronimo, Apache warrior, surrenders to the U.S. Army, ending the main phase of the Apache Wars.
1899 – Emilio Aguinaldo leads Filipino forces for the only time during the Philippine–American War at the Battle of Marilao River.
1915 – Typhoid Mary, the first healthy carrier of disease ever identified in the United States, is put in quarantine, where she would remain for the rest of her life.
1938 – Second Sino-Japanese War: The Battle of Taierzhuang begins, resulting several weeks later in the war's first major Chinese victory over Japan.
1941 – World War II: Yugoslavian Air Force officers topple the pro-Axis government in a bloodless coup.
1943 – World War II: Battle of the Komandorski Islands: In the Aleutian Islands the battle begins when United States Navy forces intercept Japanese attempting to reinforce a garrison at Kiska.
1945 – World War II: Operation Starvation, the aerial mining of Japan's ports and waterways begins. Argentina declares war on the Axis Powers.
1958 – Nikita Khrushchev becomes Chairman of the Council of Ministers of the Soviet Union
1964 – The Good Friday earthquake, the most powerful earthquake in U.S. history at a magnitude of 9.2 strikes Southcentral Alaska, killing 125 people and inflicting massive damage to the city of Anchorage.
1975 – Construction of the Trans-Alaska Pipeline System begins.
1977 – Tenerife airport disaster: Two Boeing 747 airliners collide on a foggy runway on Tenerife in the Canary Islands, killing 583 (all 248 on KLM and 335 on Pan Am). Sixty-one survived on the Pan Am flight. This is the worst aviation accident in history.
1980 – The Norwegian oil platform Alexander L. Kielland collapses in the North Sea, killing 123 of its crew of 212.
1980 – Silver Thursday: A steep fall in silver prices, resulting from the Hunt Brothers attempting to corner the market in silver, leads to panic on commodity and futures exchanges.
1981 – The Solidarity movement in Poland stages a warning strike, in which at least 12 million Poles walk off their jobs for four hours.
1990 – The United States begins broadcasting TV Martí, an anti-Castro propaganda network, to Cuba.
1993 – Jiang Zemin is appointed President of the People's Republic of China.
1993 – Italian former minister and Christian Democracy leader Giulio Andreotti is accused of mafia allegiance by the tribunal of Palermo.
1998 – The Food and Drug Administration approves Viagra for use as a treatment for male impotence, the first pill to be approved for this condition in the United States.
1999 – Kosovo War: Yugoslav SAM downed F-117A, the first and only kill by the stealth aircraft.
2000 – A Phillips Petroleum plant explosion in Pasadena, Texas kills one person and injures 71 others.
2002 – Passover massacre: A Palestinian suicide bomber kills 29 people at a Passover seder in Netanya, Israel.
2002 – Nanterre massacre: In Nanterre, France, a gunman opens fire at the end of a town council meeting, resulting in the deaths of eight councilors; 19 others are injured.
2004 – HMS Scylla, a decommissioned Leander-class frigate, is sunk as an artificial reef off Cornwall, the first of its kind in Europe.
2009 – The dam forming Situ Gintung, an artificial lake in Indonesia, fails, killing at least 99 people.
2014 – Philippines signs a peace accord with the largest Muslim rebel group, the Moro Islamic Liberation Front, ending decades of conflict.
2015 – Al-Shabab militants attack and temporarily occupy a Mogadishu hotel leaving at least 20 people dead.
2016 – A suicide blast in Gulshan-e-Iqbal Park, Lahore claims over 70 lives and leaves almost 300 others injured. The target of the bombing are Christians celebrating Easter.