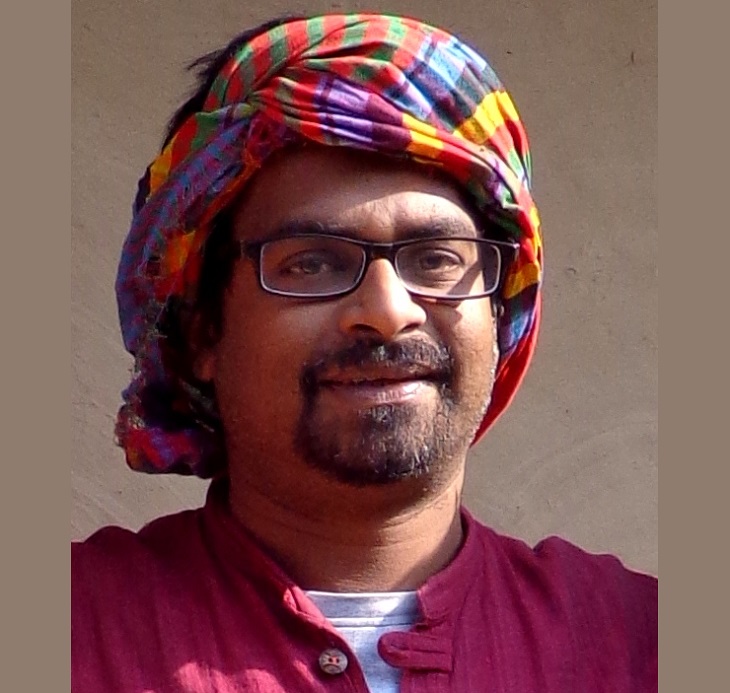 Plants and people are the historical Siamese twin with ecological vibration. Anybody can dissect them anytime, but they can’t live alone for a single moment. In Bangladesh, we have a plant based geo-cultural and political progress. If you think a very simple way you can’t think anything without plant or without touch of plant. All subaltern political movements based on plants. Tebhaga, Tanka, Nankar farmers’ movements are basically rice grower farmer’s movement. Blue mutiny related to Indigo plant and Jute movement related with Jute plant. Recent anti-ecopark movement of Indigenous peoples in the Madhupur Sal forest is related to the dominant species of Sal forest is Shorea robusta. Basically we want to discuss here the ecological relationship between plants, people and cultural politics specially the indigenous wisdom.

If you stay in the Northern part or the tea garden areas of Sylhet, you can easily meet with a rare plant named in Kurukh languge of Oraon people is Karam. Karam is a very sacred plant of the Oraon, Saontal, Pahan and Munda peoples’ culture. Historically they conserve the plant for the special ethno-political identity of their own dwelling. The life-size socio-religious festival Karam is impossible without the Karam plant. Under the Rubiaceae family the botanical name of Karam is Haldia cordifolia (Roxb.) Rids. Karam is endangered in the natural forest of Bangladesh which is guarded by forest department with corporate guns. State cannot believe the sacred conservational political power of the Indigenous people. Now we are ready to discussing the Indigenous peoples’ plants based cultural manifesto. This is strengthening the people for ecological movements with political rights.

This Re-Re song of Mandi people means, your breasts are like Miting, your thighs are smooth like Gambariphang      tree.  The botanical name of the Miting plant is Artocarpus lakoocha Roxb. under the family Moraceae. The plant Gambari-phang is Gmelina argorea Roxb under the Verbenaceae plant family. Basically the described two plants in the Mandi Re-Re song are the native plants of their Sal forest territory.

Plants in Indigenous legend and folktales
The popular folktale of Tripuri people is “Che-thuang bi-mandar: Kang-Gang” based on Chethuang tree. This folktale is about why this tree has no apical shoot. It is locally believed, this tree protects from thundering. So, it abounds in Tripuri areas.Che-thuang (Alstonia scholaris L., Apocynaceae) is rarely found in the natural forest but is available in the Tripuri villages and their surroundings.

Plants in Indigenous folk proverbs
Do-ju chaw obng ria
Gro dakko mikkhang ria
In the Mandi society this proverb has a very momentous existence for both male and female youths. This proverb means, the tonic is made of Do-ju fruit, crime changes the faces. The plant named Do-ju (Hyptis suaveolens (L.) Poit, Lamiaceae) is very rarely found now in the surroundings of Mandis because of the vanishing of natural forest and corporate hijacking of the forest resources.

“Chand, Badha, Iswarmul
Se jay na nodirkul”
This Dalu proverb means, those who use Chand, Badha, Iswarmul, live a long and healthy life. Because the plants Chand (Rauvolfia serpentina Benth., Apocynaceae), Badha (Asparagus recemosus L., Liliaceae) and Iswarmul (Aristolochia indica L., Aristolochiaceae) are used for tremendous medicinal preparation. Dalu is the smallest Indigenous community only lives in the Sherpur border belt now and displaced from their own forest lands for the long time.

Plants in Indigenous dreams
It is locally believed in Mandi society, if anybody dreams of Soinyalot, she/he becomes rich. If anybody dreams of cutting Wah, her/his relative with succumb to death. The plant Soinyalot (Cuscuta reflexa Roxb., Convolvulaceae) is also a rarely found parasitic plant in the Mandi areas because lack of busy tress. Another bamboo species Wah (Bambusa sp., Poaceae) is also in danger.

Plants in Indigenous riddles
In the Hajong society the women are asking lots of riddles to their children and their leisure period.  A popular Hajong riddle is ``Thaka jha jha, Ar Kale Raja” (Surrounded by branches of tree, amidst the palace of prince, free). The answer of this riddle is Hengos or water gourd (Cucumis sativus L., Cucurbitaceae).Another scholarly Hajong riddle said, “Aga ling ling gor chatti, tar phol khay ashin-karti” (It looks like umbrella, available from September to October). The answer of the riddle is Gua or betel-nut (Areca catechu L., Arecaceae).

Indigenous Clan's totems based on plants
In Bangladesh, many Indigenous communities have different clans and totems. Some clans are based on various plant names and beliefs. In the Saontal Society, the "Hembrom" and "Marondi" clans' totem based on “Sopri-dare(Areaca catechu L., Arecaceae)” and “Durva-man(Cynodon dactylon (L.) Pers., Poaceae)”. In Mandi ethnic communities, "Kharek(Vigna sinensis Endl. ex Hassk., Leguminosae)" is the clan's totem of Nokrekk. Totem plants of the clans have a sacred and immense ethno-political power in the society. But in the corporate controlled global changing situation the clans totems are lost their ritualistic heritage for those who are changed their religious practices.

Plants in mantras of Indigenous worships
In the Khasi society, if anybody dies among the Khasis, this mantras (verse) is recited in front of the dead body, “Khublei, Khublei, Khi lit Phtha, Ko-toui Soh-I-Iang Ubeli” (A diew, a diew, go away to Ublei-syiem (Gods' Kingdom). Phtha (Piper betel L., Piperaceae) and Ko-toui (Areca catechu L., Arecaceae) are the main crop for the Khasi people for their jhum cultivation. In the Mandi society, one of the most important socio-cultural festivals named “Ru-gala”. This mantra (verse) is recited in “Ru-gala”. “Again we the mankind, adore Mi., Mikhop, Tha-bol-chu, Ething, Haldi, Ak-Kharu...again...again we bow down our head…before God who has given these…” In this Mandi verse the Khamal (Mandi priest) is addressing the surrounding jhum crops names at a time. Mi (Oryza sativa L., Poaceae), Mikhop (Zea mays L., Poaceae), Tha-bol-chu (Manihot esculenta Crantz., Euphorbiaceae), Ething (Zingiber officinale Rose., Zingiberaceae), Haldi (Curcuma longa L., Zingiberaceae), Ak-Kharu (Benincasa hispida (Thumb.) Cogn., Cucurbitaceae) are mainly the crop of jhum. But state totally expelled jhum in the Madhupur Sal forest areas by armed pressure with the help of forest department. Mandi people lost their jhum crop diversity and bio-ecological birthright. Indigenous legends emphasize the need to protect the earth not because it is useful to humans but because it is sacred. The perception of conservation as a religious duty, of course, also serves ecological, cultural and political purposes.  Indigenous people live in nature with a sort of eco-friendship commitment. They think themselves as a part of the biodiversity, not the owner or ruler of it. They do not differentiate the "environment" from their daily life. They believe, man is a part of nature, as like a tree, insect, bird, mushroom, pig, animal, rain, stone, soil, sun etc.

In the Jaintia society, they is used "Gindit-sor-oh" plant {Thysanolaera maxima (Roxb.) Kuntze.} in their child naming festival "Pamon-so-oh". In the Mei-tei Muslim Manipuri or Pangon society, "Kang"  {Entada phaseoloides (L.) Merr.} seed is used in their New Year festival, "Bisu". In the Indigenous culture, they conserve various plants by socio-cultural taboos. For example, in the "Soor-ong's clan of Khasi and Jaintias, they do not cut, burn or destroy the "Rom-Bwii" plant {Hydnocarpus kurzii (King.) Warb.}. Many ethnic societies are preserving a particular tree preserved from time immemorial. The plant "Prithhol pan" (Jatropha curcas L.) is used for "Hodom-wai" worship of the Kochs as a sacred one. But in the period of so-called global culture controlled by corporate companies they use the plant Jatropha curcas for bio-diesel. They have no relationship with this plant; they use plants only for corporate profit and power. State of the Bangladesh is also controlled by the corporate pressure and perspectives. State always overlooks the plant-philosophy and subaltern political agenda of Indigenous people. Bangladesh recently have finalized a new biodiversity related act named ` Bangladesh Wildlife act 2010’ without the public opinion and without concern of the biodiversity dependent peoples. This is the first legal documents of the State which is recognized the term `sacred plants’ and `sacred forest’. The new act is listed only 57 plants for special concern. But it is unthinkingly not recognized the plants which are largely used in whole over Bangladesh for their historical sacredness, namely, banyan, tamarind, mahua, lotus, rice, kash, khag, gila, cactus, orchid, sundri, dumur, bakul, hisal, tomal, wood apple, basil, koroch, arum and wild yam etc. Indigenous peoples are demanding government should be finalizing the new Wildlife act with the opinion and knowledge of the plants based lives.

Most of the previous documents which are based on the indigenous plants practices are described only the food and medicinal plant uses of Indigenous people. But, in this tales we are trying to focus the different dimension of plant-people culture. We believe Indigenous culture born from the plants embryo and plants also live with the peoples’ embryo. In 1855, the Saontal people used the branch of the Sal trees against the unjust British colonial rules in the Hul or Saontal rebellion. Plants give us not only food, house, space, cloth, color, medicine, ritual, breath, river, odor, culture, it also give us the political power to live with plant-civilization. But our High Court and Supreme Court give the permit to cut and destroy the 4000 urchin native trees in the Nahar Khasi punji areas of Srimangal. The Khasi people are trying to protect their trees like their family member from the violation of the teagarden. The Nahar tea Company also cut and destroyed their "Rom-Bwii" plant {Hydnocarpus kurzii (King.) Warb. The Khasi people believe that, Rom-Bwii is the clan totem of the Khasi and Jaintia people. They do not cut burn or destroy this plant. Khasi people are demonstrating several activities to save the 4000 tree lives. Can we feel the sparkling of the plants mourning soul? Can we realize recent political spirits of the Khasi movement to save trees is also come from the plants core. If you believe the Indigenous plants based wisdom you can start now to do amazing.